Indianapolis, IN – After winning four-straight matches at home, the Austin Peay State University (APSU) men’s tennis hit the road for the first time in two weeks to take on IUPUI; where Jacob Lorino [1] won his sixth-straight singles match, but the Governors fell to the Jaguars, 5-2, Saturday at the West Indy Racquet Club. 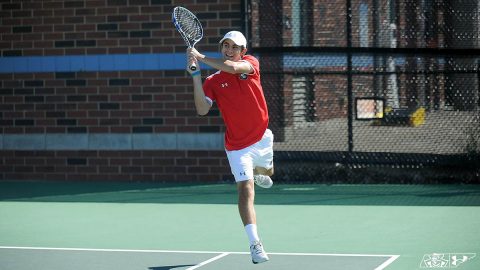 It was a good start to the day for the Governors in doubles play, as No. 2 match-up went final first and saw Anton Damberg [2] and Julius Gold [3] pick fifth-straight win together. But that was the last doubles match the Govs would win, as the Jaguars picked up wins on the No. 1 and No. 3 lines to claim the doubles point.

In singles play, IUPUI extended their lead to 2-0 quickly, as the Jaguars knocked off Gold in the No. 3 position. But the No. 4 singles match was the next on the board, with Oliver Andersson [4] picking up an impressive win to cut the Govs deficit in half.

But that is as close as the Governors would get in the match, as IUPUI knocked off Christian Edison [5] in the No. 1 match and Hunter Sanders [6] in the No. 6 match to lock up the win.

With the match already decided, Damberg lost a hard-fought battle in the No. 2 position, ultimately falling 10-8 in the third set.

In the final match of the day, Lorino picked up his fifth-straight singles win on the No. 5 line to improve to a team-best 6-5 this spring. The junior from Knoxville joined Edison as the second Governor to win ten matches this seaosn dating back to the fall campaign.

Up Next For Austin Peay State University

The Austin Peay State University men’s tennis team will get right back in action when they return to the Governors Tennis Center to host an 11:00am, Sunday, match against the Flyers of Dayton.