Clarksville, TN – If you thought March Madness was just on the basketball court this week, you are mistaken if you are a fan of Austin Peay State University (APSU) athletics, as the next seven days will be full of action both home and away for the Governors.

Now while there is no question the men’s and women’s Ohio Valley Conference Basketball Championships at the Ford Center in Evansville, IN, will headline this week’s action – and rightfully so – with possible bids to the NCAA tournament on the line, but there will be plenty more action for Govs fans to watch. 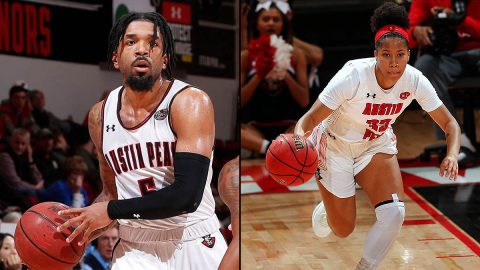 First, the Governors softball team will open the home part of their 2020 regular season schedule this weekend at Cathi Maynard Park-Cheryl Holt Field, after opening the season with a four-week road trip, by hosting Bradley, UMass Lowell and Purdue Fort Wayne.

Second, the Governors baseball team opens OVC play at home this weekend at Raymond C. Hand Park by hosting Murray State for a three-game series, after hosting Southern Illinois on Tuesday in their final pre-conference tune up.

And finally, the Govs beach volleyball team opens its fourth regular season schedule this weekend at Central Arkansas Beach Tournament, in Conway, AR, where they will take on North Alabama, Hendrix, Park University and Central Arkansas.

But back to the headliner of the week, the OVC Basketball Championships, the men’s basketball team will go in as the third seed in the tournament and open play, at 8:30pm, on Thursday in the quarterfinals versus the winner of Wednesday’s first-round matchup between No. 7 seed Jacksonville State and No. 6 seed Eastern Illinois.

A win versus JSU or EIU on Thursday puts the Govs in a 9:00pm Friday semifinal game versus No. 2 seed Murray State, who the Govs lost to in their regular-season finale this past Saturday.

If the Govs make it past Murray State, then their most likely opponent will be the tournament’s No. 1 seed Belmont, in what would be a 7:00pm Saturday contest, with a bid to the NCAA Tournament Championship on the line.

While it isn’t an easy road, the Govs do have wins over each team they could face in the tournament, splitting games with EIU, Murray State and Belmont, while winning the only game of the regular season versus Jacksonville State.

As for the women’s basketball team, they too will have to win three games to earn the OVC’s automatic bid to the NCAA Tournament, but unlike the men’s team, they will have to open the tournament, 3:00pm, Wednesday afternoon having to face the defending tournament champions and No. 2 overall seed Belmont.

The Govs lost both matchups versus the Bruins during the regular season but took them down to the wire at the Dunn Center in a one-point loss, back on January 25th.

If the Govs get past Belmont, then the most probably path to the OVC Championship will have to go through No. 3 seed Southeast Missouri on Friday and No. 1 seed UT Martin on Saturday, both swept the Govs during the regular season.

So, while basketball will headline the week’s activities APSU Govs fans will have plenty to watch up for this week for the Red and White.