Tennessee Vols Basketball travels to Lexington to take on Kentucky

Lexington, KY – The Tennessee Vols basketball team hits the road for a Tuesday night contest against sixth-ranked Kentucky inside Rupp Arena. Tipoff between the Vols and the Wildcats is set for 8:00pm CT on ESPN.

Tuesday’s game can be seen on ESPN, online through WatchESPN, which can be accessed at espn.com/watch and on any mobile device through the ESPN App. Karl Ravech and Jimmy Dykes will have the call. 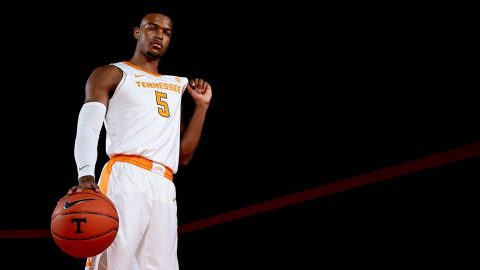 Last time out, the Vols battled past SEC rival Florida, 63-58. UT was led by junior All-SEC candidate, John Fulkerson [2], who poured in a game-high 22 points, finishing 10-of-15 from the field, while knocking down his first career 3-point field goal.

The story of the day came from freshman Santiago Vescovi [4], who’s parents surprised him prior to tipoff. His parents and sister traveled through the night from Uruguay, arriving while Vescovi was completing his pregame routine.

A win on Tuesday night would be the Vols third triumph over an AP top-25 opponent this season and would mark the fifth victory for UT over a top-10 opponent during the Rick Barnes [5] era. A victory would also be the Vols sixth ever win inside Rupp Arena and the second in the last three seasons.

Up next, the Vols return home to conclude their regular-season, with a home contest against Auburn. Saturday’s start time is slated for 11:00am CT on either ESPN or ESPN2. Seniors Jordan Bowden [6] and Lamonte Turner [7] will be honored prior to tipoff as part of UT’s senior day ceremony.

The Wildcats have a 91-17 edge when the series is played in Lexington.

Overall, the Vols have won four of their last seven games vs. Kentucky.

Kentucky posted a 77-64 win when these teams met in Knoxville on February 8th.

Be Tennessee’s sixth victory in its last nine games against Kentucky.

Give the Vols three wins this season over AP top 25 opponents.

Be Tennessee’s fifth victory over a top-10 opponent during the Barnes era.

Through 16 SEC games, Tennessee and its opponents have both scored exactly 1,061 points.

UT is 7-1 on Tuesdays this season.

In Tennessee’s last five games, junior forward John Fulkerson [2] is averaging a team-best 17.0 points while shooting .547 from the field.

SEC Defensive Player of the Year candidate Yves Pons [10] has blocked at least one shot in every game this season.

Barring injury or illness, senior guard Jordan Bowden [6] will finish his career in the top five on Tennessee’s list for career games played. Tuesday will be the 131st game in which he’s appeared—tying him for sixth-most all-time.

About The Kentucky Wildcats

Since losing on the road at then-16th-ranked Auburn on February 1st, Kentucky has ripped off eight consecutive SEC wins to bring home the 49th outright SEC championship in program history. The Wildcats currently sit at 24-5 overall and hold a league-best mark of 14-2 in SEC play.

Sophomore guard Immanuel Quickley has been huge for the Wildcats, averaging 18.2 points per contest during their eight-game win streak. During this stretch of play, he’s eclipsed 20 points four times and scored a career-high 30 points on Tuesday night at Texas A&M. His 16.3 points per game overall leads UK and ranks eighth in the SEC.

Big man Nick Richards has also been a massive bright spot for the Wildcats, ranking third on the team in scoring (13.9 ppg) and first in both rebounds (7.8 rpg) and blocks (2.2 bpg). His 7.8 boards per contest ranks third in the SEC and his 2.2 blocks per game trail only Tennessee’s Yves Pons [10] for the most in the league.

Kentucky also features the SEC’s leading assist man in Ashton Hagans. Hagans is currently averaging 6.4 helpers per game. Hagans also leads UK in steals, with 2.0 per game, a mark that ranks second in the SEC, trailing only Missouri’s Dru Smith.

The University of Kentucky, founded in 1865, is one of just two land grant universities in the state of Kentucky. The other being NCAA Division II member Kentucky State. What was once the Agricultural and Mechanical College of Kentucky, UK now stands as the state’s largest university with an undergraduate enrollment of 22,136.[

Tennessee had no answer for 15th-ranked Kentucky on February 8th, 2020, falling to the Wildcats, 77-64, at Thompson-Boling Arena.

In his first-ever taste of the heated border rivalry, freshman Santiago Vescovi [4] led the Vols offensively, tying his career-high for points with 18.

Senior Jordan Bowden [6] and junior John Fulkerson [2] both added 16 points for the Big Orange, as Bowden finished with a team-high nine rebounds.

Tennessee junior Yves Pons [10] finished the game with four blocks, extending his streak of consecutive games with at least one block to 23.

The Wildcats hung tough and built on their lead, but Fulkerson closed out the first half with a pair of free throws to cut Kentucky’s halftime lead to seven, 37-30.

At the break, Fulkerson led the Vols with 12 points, eight of which came at the foul line. The junior also recorded four rebounds in the first 20 minutes.

Coming out of the break, Fulkerson scored Tennessee’s first three points of the second half, and Vescovi followed with one of his four 3-pointers of the afternoon.

With just more than nine minutes left in the contest, Vescovi hit his third triple of the half to bring the Vols within four points, but Kentucky had an answer for every charge Tennessee attempted to mount down the stretch.

The Kentucky series is UT’s oldest and most-played among SEC opponents. The Vols and Wildcats first met on Feb. 5, 1910, and have clashed 229 times over the years.

On 14 different occasions—first in 1950 and most recently in 2017—an unranked Tennessee team has defeated a Kentucky team ranked in the AP top 10.

No program in college basketball has logged more wins over Kentucky than Tennessee (73).

Kentucky is one of only two SEC schools (along with Alabama) to lead its all-time series against the Volunteers.

Tennessee has 15 all-time wins over the Wildcats at Thompson-Boling Arena, including four straight between 2016-19.

Over the last three seasons, Rick Barnes [5] and his staff guided the Volunteers to an 11-2 record in regular-season rematch games (SEC Tournament games not included).

The lone losses came this season at South Carolina and Arkansas.

Yves Pons [10], the SEC’s leading shot-blocker, has blocked at least one shot in every game this season.

His streak of 29 straight games with at least one block is the longest such streak by a Vol since at least the 1988-89 season (research is ongoing).

Pons has blocked three or more shots in 15 games this season, including a program-record-tying six-block effort against Jacksonville State on December 21st.

With two regular-season games left to play, he already ranks second on UT’s single-season blocks list. The record is 73, by C.J. Black in 1997-98.

Tennessee under Rick Barnes [5] is 50-6 when holding its opponent below a .390 field-goal percentage.

Tennessee under Rick Barnes [5] is 45-3 when it takes a double-digit lead into halftime.

The Vols are 10-1 this season when they total 16 or more assists as a team.

The Vols are 6-2 during Josiah-Jordan James [3] career when he records five or more assists.

Tennessee is undefeated during John Fulkerson’s [2] career in games in which he makes a 3-point shot.