Clarksville, TN – With the regular season in the books, the Austin Peay State University (APSU) women’s basketball is set to make its sixth-straight appearance in the Ohio Valley Conference Women’s Basketball Championship; where the Governors will square off with the four-time defending tournament champion Belmont Bruins in a 3:00pm, Wednesday, tilt at the Ford Center in Evansville, Indiana. 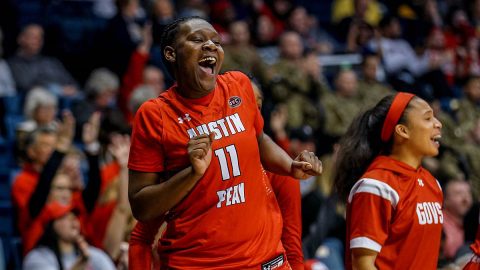 After winning the final two games of the regular-season, Austin Peay State University received the No. 7 seed in the OVC Tournament. Belmont won their final eight games of the regular season en route to a tie with UT Martin at the top of the OVC standings with a 16-2 record.

Because the Bruins dropped their only head-to-head contest with the Skyhawks, they are set to be the No. 2 seed in Evansville.

The winner of Thursday’s contest between Austin Peay and Belmont will play a 3:00pm, Friday, semifinal game against the winner of the No. 3 Southeast Missouri and No. 6 Tennessee Tech.

The Co-Champions of the regular season in the Ohio Valley Conference, Belmont picked up its fourth-straight regular season title by posting a 16-2 record in league play. The Bruins tied with UT Martin in the regular season, but because the Skyhawks won the lone head-to-head match-up between the two squads, Belmont is the No. 2 seed in the tournament.

It is not just Harmeyer crashing the glass for the Bruins, as a team Belmont ranks fifth in the NCAA in rebounds (1,273) and rebounds per game (43.9). The Bruins are especially good at cutting possessions short on the defensive glass, as they ranks second nationally in defensive rebounds per game (31.6).

The Bruins are one of the best defensive teams in the country; with 9-of-13 players listed at six-feet or taller, Belmont’s length affects opponents shots and holds teams to a 33.2 percent field goal percentage – good for third best in the NCAA. The Bruins length also helps them shut down opponents from three-point range, as they ranks fourth in the country in three-point field goal defense (25.9 percent).

This is the 20th meeting in a series that dates back to 1982; the Governors trail in the all-time series 13-6, and have lost the last six match-ups with the Bruins. Austin Peay State University and Belmont played twice during the regular season; with the Govs dropping a heartbreaker, 53-52, in Dunn Center on January 25th, before the Bruins knocked off the Governors, 69-46, in Nashville on February 8th.

This will be the first ever postseason meeting between Austin Peay State University and Belmont since the Bruins joined the OVC in 2012.

Playing in their sixth-consecutive Ohio Valley Conference Women’s Basketball Championship, the APSU Govs are on the second-longest streak of postseason appearances in program history.

The Governors are 10-12 all-time in the OVC Tournament quarterfinal round.

In the final game of the regular season, Austin Peay State University posted a 29-point blowout win on the road at Murray State. It was the biggest road win by either squad in the 43-year history of the Austin Peay-Murray State women’s basketball series.

With 258 made three-pointers this season, the Governors have already broken the single-season team three-point record — which was previously held by the 2018-19 squad (241 3FG).

The Govs are 1-of-6 teams in the country that has attempted 815-plus triples this season, and are 1-of-11 teams that have made 255 or more threes this season.

The APSU Govs defense is averaging 21.3 turnovers forced per game, which ranks 11th in the country and leads the Ohio Valley Conference.

The Governors lead the OVC and rank 19th nationally with a plus 5.45 turnover margin.

In two games against Belmont this season, the Govs are averaging 19.5 turnovers forced per game.

Austin Peay freshman guard Ella Sawyer [5] was named to the OVC All-Newcomer team, she is the first Gov to receive those honors since Tearra Banks [6] in 2013-14.

After averaging 23.5 points per game over the final two games of the season, Sawyer was named OVC Freshman of the Week for the first time of her career.

Sawyer is the only Gov to have started in all 29 games this season, she leads all OVC freshmen in assists per game (2.6) and three-point percentage (37.4 percent).

Maggie Knowles [7] leads the OVC and ranks 10th in the NCAA this season, shooting 44.6 percent from three-point range.

Shooting 42.3 percent from three-point range in her career, Knowles is currently the APSU career leader in three-point percentage.

With 45 made three-pointers this season, freshman Shay-Lee Kirby [8] has eclipsed her teammate Maggie Knowles [7] for the third-best three-point shooting season by a freshman in program history – Knowles connected on 43 three-pointers during her freshman campaign.

Single-session tickets ($15.00 for women’s sessions) for the OVC Women’s Basketball can still be purchased by calling 931.221.PEAY or visiting www.letsgopeay.com/buytickets. [9] Austin Peay is also still selling all-session passes for $80.00, which can be purchased in the same manner; all tickets can be picked up at the Ford Center box office window.