Kiawah Island, SC – In what head coach Jessica Cathey [1] hopes will be the launching point for a successful spring, the Austin Peay State University (APSU) women’s golf team won the Flight Team Championship at the Kiawah Island Classic at Oak Point, which wrapped up Tuesday. 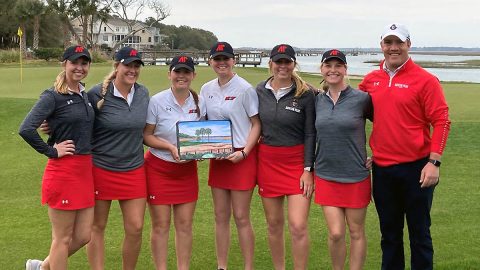 Showcasing across-the-board improvements all three days, the Govs outlasted a Western Carolina group whose final-round 291 was the best at Oak Point, Tuesday. However, Austin Peay State University’s 296 kept the Govs at the top of Flight Championship and tied them for 25th overall.

“We were excited to come back to this course and get redemption,” Cathey said. “We had to overcome a lot. Our goal was to either finish top half and play at [Osprey Point], or to win the Oak Point flight. And now we’ve got some hardware coming home with us.

“I think this will give us momentum going into next week. We can win next week. We’ve talked about it, and coming off two extremely solid rounds in this tournament. We have to keep the momentum.”

“Meghann came out strong,” Cathey said. “[Being] four-under after four holes sets the standard for the rest of the round. She had a couple of hiccups mid-round but closed out really strong.”

When Stamps faltered on the back-nine, sophomore Taylor Dedmen [3] stepped up and carded a two-under 34 on the back; she birdied No. 13 and No. 18, one of only three birdies at No. 13 on the day. Dedmen led the Govs with a share of 41st, shooting 222 (79-70-73); she and Stamps both carded eight birdies for Austin Peay State University.

“Taylor had all three rounds in the 70s,” Cathey said. “One bad swing cost her Sunday, and we know we can always count on her. I knew Shelby could do better than she did in qualifying, and she exceeded my expectations. She was the most consistent.”

“What got us Sunday were big numbers,” Cathey said. “We talked about not allowing those bad shots to happen. We lessened those big numbers today. Proud of how Riley finished the tournament and produce a fourth round.”

The Austin Peay State University women’s golf team is back in action next week at the UNF Collegiate in Jacksonville, March 9th-10th.