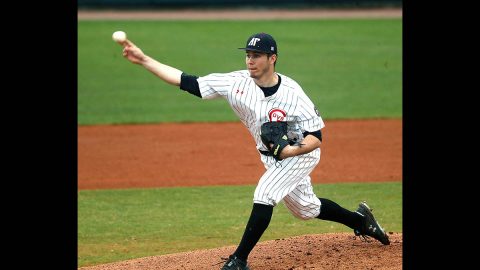 Jula (1-0), making his first collegiate start, faced 17 batters in his four shutout frames, allowing one hit and walking three. Southern Illinois’ biggest threat to score against Jula came in the third inning when they put runners on second and third with one out.

But Jula induced a sharply-hit ground ball, which third baseman Gino Avros [3] fielded and fired home for an out to deny a run.

The Govs tacked on a second run two innings later, loading the bases with one out when center fielder Garrett Spain [4] reached on a bunt single. Shortstop Bobby Head [5] flew out to right-center field for a sacrifice fly. Saluki center fielder Nick McAlister nearly denied the Govs a run when he made a stellar throw to third base where Ty DeLancey [6] was tagged out for a double play, but left fielder TJ Foreman [7] touched home just before the tag for a 2-0 APSU lead.

Southern Illinois (7-6) broke through against the APSU bullpen in the sixth. Left fielder J.T. Weber doubled to start the inning and scored a squeeze bunt by designated hitter Lucas Danielewicz, cutting the Govs lead in half, 2-1.

Austin Peay State University would tack on a pair of insurance runs in the eighth. Again, a leadoff double started a rally with Govs shortstop Bobby Head [5] doing the honors. Right fielder Skyler Luna [8] singled to move Head to third and Head scored on Tipler’s ground ball. Tipler would then score on Avros’ two-out single, giving the Govs a 4-2 lead.

Avros, Head, and Spain had two hits each to pace the APSU Govs 10-hit outing. Avros, Foreman, Head, and Tipler each had an RBI.

SIU starter Blake Begner (1-2) held the Govs to two runs on five hits while striking out six in his five-inning outing, but suffered the loss.

Austin Peay State University baseball continues its homestand when it opens Ohio Valley Conference play with a three-game series against Murray State. The First Financial Battle of the Border begins with a 6:00pm Friday contest at Raymond C. Hand Park.