Clarksville, TN – The Austin Peay State University (APSU) men’s basketball team will lace it up to compete for the 2020 Ohio Valley Conference Men’s Basketball Tournament title, beginning with an 8:30pm, Thursday, March 5th, 2020 quarterfinal matchup against the victor between sixth-seeded Eastern Illinois and No. 7 seed Jacksonville State in Wednesday night’s opening round. 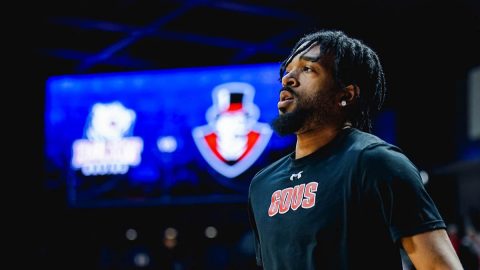 The Govs look to get back to the OVC Championship game for the first time since 2016 after agonizingly close semifinal finishes in 2018 and 2019—both against Belmont.

This year, the Govs enter the fray loaded with firepower, with OVC Player of the Year Terry Taylor [1] and Freshman of the Year Jordyn Adams [2] leading the charge for Austin Peay State University.

For those making the trek to Evansville, a couple of reminders: the Ford Center in Evansville, site of this year’s event, has instituted a clear bag policy. Children under the age of two may enter the Ford Center free of charge, provided they sit the lap of a parent/guardian. And all doors to the Ford Center open one hour prior to the first game of each session.

About the OVC Tournament

The APSU Govs are 7-4 against the field this season, splitting the season series against Murray State, Belmont, Eastern Illinois and Tennessee State and taking one each from Morehead State, Eastern Kentucky and Jacksonville State. The Govs have faced the other seven teams in the tournament field at least once since 2012, with two exceptions—Eastern Kentucky (2008) and Murray State (2009), the latter of whom the Govs would see in the semifinal round.

All-time, Austin Peay State University is 24-23 in tournament competition against the field set to compete for the 2020 title.

The APSU Govs advanced to the semifinals last season before falling to Belmont in an 83-67 loss, March 8th, 2019. The Govs exorcised that particular demon earlier this year when they toppled the Bruins in an 86-78 win in the Dunn Center, January 25th.

However, the Govs still seek their first trip to the title game since 2016; Austin Peay State University has been semifinalists the last two seasons, losing to the Bruins both times. Austin Peay State University cannot meet the Bruins until the title game this time around, but the Govs will need to handle either Eastern Illinois or Jacksonville State first in order to set up a semifinal meeting with Murray State.


Keep An Eye On

A win would put the Govs in the OVC Tournament semifinals for the third straight season, the longest streak of semifinal or better appearances for Austin Peay State University since 2000-05.

Taylor and Adams are just the third pairing in OVC history to win Player and Freshman of the Year in the same season; both previous times (1994 Tennessee State, 2008 UT Martin), the duo reached at least the OVC Tournament semifinals.

Taylor (21.4 ppg) and Adams (17.8 ppg) have combined to average 39.2 points per night, the third-highest average by a pair of teammates in Division I.

Redshirt junior Eli Abaev [5] is averaging 9.6 rebounds over the last 11 games, with four double-doubles in his last five outings.

The Govs are at plus-5.5 in average rebound margin and plus-2.0 in turnover margin since OVC play began

Milestone Watch—Season
With 29 points, Taylor would pass Trenton Hassell (2000-01) for second all-time in single-season scoring by an Austin Peay State University junior. With 11 rebounds, he would pass Tommy Brown (1990-91) for third on the single-season list.