Greenville, SC – #RV/NR Tennessee (20-9, 10-6 SEC) will open play on Thursday at approximately 7:30pm CT in the second round of the 2020 SEC Tournament at Bon Secours Wellness Arena. 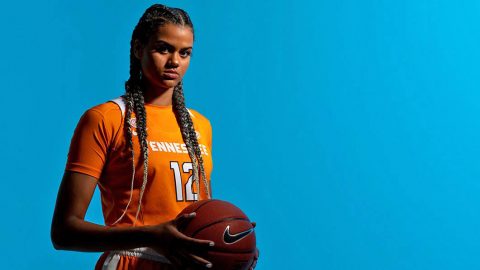 UT comes into the tournament on a three-game winning streak, having defeated Vanderbilt and Ole Miss at home and Auburn on the road to secure the program’s 43rd 20-victory season in the past 44 years.

The winner of Thursday night’s contest advances to the third round to meet No. 3 seed Kentucky at approximately 8:30pm on Friday.

Thursday’s game will be televised by the SEC Network with Courtney Lyle (PxP), Carolyn Peck (Analyst) and LVFL Andraya Carter (Reporter) on the call.

SEC Radio Network will broadcast every game from the SEC Tournament on SiriusXM 374 as well as on Sirus 138/XM 190 and on Sirius/XM app. channel 961.

Tennessee enters Thursday night’s game with a 79-23 (.775) all-time record in the 41st year of the SEC Tournament.

The Lady Vols improved to 35-5 all-time in their opening game of the SEC Tournament and are 26-9 in their second contest of the tourney.

No. 6 is the Big Orange’s highest seeding since entering as a No. 5 in 2017 at Greenville.

Tennessee has had 15 SEC Tournament MVPs through the years, with a Lady Vol winning four of the last nine awards.

This also is the first SEC Tournament for Kellie Harper [9] and her coaching staff while at Tennessee.

Assistant Lacey Goldwire [10] worked on Mike Neighbors’ staff at Arkansas last season during the Razorbacks’ drive to a runner-up finish.

This marks the fourth time Greenville has played host to the SEC Tournament.

UT stands at 4-2 in games played in the city after beating LSU and falling to Mississippi State last year.

Two-time NCAA champion Candace Parker, UT’s all-time No. 3 scorer (2,137 pts.) and No. 8 rebounder (972 rebounds), will be honored as the Lady Vols’ SEC Legend at this week’s SEC Tournament.

She also is a TV commentator for NBA on TNT, NBA TV and NCAA Tournament coverage by Turner Sports and CBS Sports.

The following Big Orange Tailgates will be held ONLY if the Lady Vols advance to that day’s tournament play.

The Road Leading Up to This

Tennessee has won its last three contests, defeating Vanderbilt (67-63) and Ole Miss (77-66) in back-to-back home games and closing out the regular season with a 56-55 squeaker at Auburn to improve to 20-9 overall and 10-6 in league play.

The past three wins have been critical bounce-back contests after UT dropped five straight during a brutal stretch that included No. 1 South Carolina, No. 8 Mississippi State, LSU (receiving votes), No. 16 Texas A&M and No. 22 Arkansas in succession.

UT had won six straight SEC contests and stood at 7-1 before dropping those five consecutive contests.

Burrell has started the past seven games after coming off the bench the previous 22 contests. She is averaging 13.0 ppg. and 6.3 rpg. over her last seven  games.

Junior Rennia Davis [11] tallied a double-double with 22 points and 10 rebounds, and freshman Jordan Horston [4] hit a runner in the lane with 0.6 seconds left on the clock to lift Tennessee to a crucial 56-55 win at Auburn to close out the regular season on Sunday afternoon.

The victory improved the Lady Vols’ record to 20-9 overall and 10-6 in the SEC, earning them a four-way tie for third place in the SEC regular season with Texas A&M, Kentucky and Arkansas.

The double-double was the 29th of Davis’ career (11th this season), tying Bashaara Graves for 10th all-time among Lady Vols. Redshirt senior Lou Brown [3] was Tennessee’s next highest scorer, posting nine points off three-of-six shooting from behind the arc.

Auburn (10-17, 4-12 SEC) was paced by senior Daisa Alexander, who finished with 15 points, followed by sophomore Robyn Benton who had 11.

Notes From The Auburn Game

Keeping Thompson In Check
Auburn junior Unique Thompson entered the game averaging 16.6 ppg. and 11.6 rpg. and was fresh off recording her 41st career double-double against Missouri. Tennessee managed to hold her to just six points and five rebounds on the day.

20+ Davis
With 22 points against Auburn, Rennia Davis [11] recorded her sixth 20+ game of the season and the 13th of her career, putting her at ninth all-time among Lady Vols.

Dominating The Boards
The Lady Vols out-rebounded the Tigers by a commanding 50-26 margin. UT has now out-rebounded 21 of 29 opponents on the season and boasts a +11.4 rebounding margin.

20-Win Season
With the victory over Auburn, UT claimed its 20th victory of the season. Tennessee has now posted 20-win seasons in 43 of the last 44 years.

Team Effort
Every Tennessee player who saw action against AU contributed at least two points to the victory, and UT’s bench outscored Auburn’s 15-9.