Evansville, IN – Round Three goes to the Govs. After two hard-fought matchups in the regular season yielded a split, the Austin Peay State University (APSU) men’s basketball team erased the sour memories of the February 22nd loss in Charleston with a 76-65 win against Eastern Illinois in the 2020 Ohio Valley Conference Tournament quarterfinals. 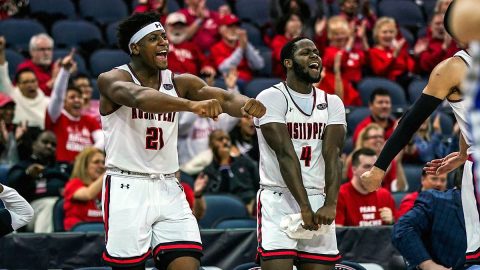 The Govs raced out to a 17-0 lead thanks to some outstanding work by Antwuan Butler [1] at the point of attack; the Philadelphia native repeatedly drove the lane and either created space for himself or a teammate.

Jordyn Adams [2] was a big part of the attack early, twice earning old-school three-point plays, and the stifling defense held Eastern Illinois without a bucket for nearly seven minutes.

Adams took on more of a distribution role as the half went on; he handed out seven assists in the first half alone, a career-high that didn’t take away in the slightest from his ability to get to the rim. After a quick eight points in the first eight minutes, the Panthers made it a point to take away any space for the Silsbee native to operate; he countered by finding open looks for his teammates.

After relinquishing a 13-point lead in the last meeting between these teams, the Govs kept a foot on the gas, building the first-half lead as high as 23 points. While it could be assumed that Eastern Illinois would not shoot 13 percent from the floor like the Panthers started at, and it would be difficult for the Govs to maintain the 72 percent mark they opened with, a 29-6 advantage to start the game is a nice way to start a tournament stay.

Most of the first half went that way for the Govs. When Evansville native Sam DeVault’s [3] pick-and-pop three swished home on Austin Peay State University’s final first-half possession, it took the Govs into halftime with a 42-19 lead.

With that kind of lead at halftime, it usually doesn’t matter what happens in the second half. But this is the same Eastern Illinois team that had taken down Murray State after trailing by 27 points, two days before rallying from the 13-point deficit against the Govs. The phrase ‘usually’ doesn’t seem to apply to the Panthers.

But for everything the Panthers had done right over the last month-plus to become one of if not the hottest team in the league, Eastern Illinois could not get shots to fall.

Credit an attacking Austin Peay State University defense for what it was able to do against the Panthers; you can do that while acknowledging that Eastern Illinois, less than 24 hours removed from a grueling battle with Jacksonville State, might not have had the freshest legs possible. And Austin Peay State University made the Panthers pay for every mistake; turnovers were capitalized on. When the Govs got it into the paint, it was a bucket.

The Govs didn’t build on that halftime lead, but Eastern Illinois didn’t cut much out of it either. Austin Peay State University’s shooting came back to earth a little bit, and Eastern Illinois’ shooting percentage finally exited the cellar. But the Govs, on a mission, left no doubt Thursday night in advancing to the semifinal round.

For a team featuring Mack Smith, one of the deadliest long-range shooters in the country, the Panthers never found the range, going 4-of-22 from deep. The Govs were significantly better, finishing at 7-of-12 from beyond the arc.

Make it three straight OVC Tournament semifinal appearances for Austin Peay State University, the longest since a five-year streak from 2000-05.

The APSU Govs equaled their season-high with 22 assists, with Adams handing out a career-high seven and Evan Hinson [4] equaling his Austin Peay State University best with three.

With a pair of blocked shots, Taylor has now recorded multiple blocks or steals (or both) in 22 of 32 games this season.

Antwuan Butler [1] is sporting a 3.7-to-1 assist-to-turnover ratio over the last seven games. He handed out his 100th assist of the campaign during Thursday’s quarterfinal round; he and Carlos Paez [7] are the first Austin Peay State University teammates with 100 assists in a season since at least the turn of the century.

Opening Statement
“I felt like it was the best start I’ve ever had in a game that meant as much since I’ve been here at Austin Peay State University. Guys were locked in, really focused, and they were prepared.”

On Woodard
“He’s got a big, strong body. He’s as good an on-ball defender as we’ve got on this team. He’s won. He doesn’t do anything outside of our team. He stays within who he is, he has an identity, he has a role and he understands that role and does it to the best of his capabilities.”

On defensive plans
“They’re a hard team to guard. We’ve played three times two of the last three years. Josiah Wallace is a heck of a player, Mack Smith is a heck of a player. We felt like we had to mix in a few things here and there, switch some screens, change some things to keep them off balance. We made them take a lot of tough twos.”

Next Up For Austin Peay State University Govs

One loss vanquished; now the Austin Peay State University men’s basketball team turns their attention to the Murray State squad that handed them a loss in the regular-season finale in Murray, KY.