Knoxville, TN – The Tennessee men’s basketball team returns home to Thompson-Boling Arena for its regular-season finale in a Saturday afternoon contest with SEC rival Auburn. Tipoff from Knoxville is set for 11:00am CT on ESPN2.

Prior to tipoff, seniors Lamonte Turner [1] and Jordan Bowden [2] will be honored during UT’s senior day ceremony

Saturday’s game can be seen on ESPN2, online through WatchESPN and on any mobile device through the ESPN App. Fans can access WatchESPN at espn.com/watch. Mike Morgan and Jimmy Dykes will have the call. 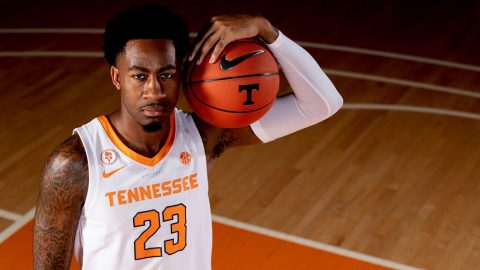 Tennessee Men’s Basketball will take on Auburn at Thompson-Boling Arena on Saturday at 11:00am CT. (UT Athletics)

Last time out, the Vols used a dominant second half to battle past Kentucky inside Rupp Arena, 81-73. Junior All-SEC candidate and SEC Community Service Team member John Fulkerson [4], led the Vols with a career-high 27 points, knocking down 10-of-15 attempts from the field, while also finishing a perfect 7-of-7 from the foul line.

Freshman Josiah-Jordan James [5] was huge in the second half for UT, scoring all 16 of his season-high point output in the contest’s second frame, shooting 5-of-9 from the field, pulling in seven rebounds and dishing off five assists.

A victory on Saturday would end UT’s four-game losing skid against Auburn and give the Vols four wins over top-25 opponents this season.

Up next, Tennessee will travel Nashville to take part in the 2020 SEC Tournament. The Vols are set to begin play on Thursday with a time and an opponent to be determined following the conclusion of Saturday’s SEC contests.

The Vols have a 48-8 edge when the series is played in Knoxville.

Tennessee Vols have won 11 of the last 16 meetings in the series.

The Tigers won this season’s first meeting back on February 22nd by a score of 73-66 at Auburn Arena.

Give Tennessee a three-game win streak to end the regular season (against teams who occupied the top three spots in the SEC standings last Saturday morning when this three-game stretch began).

Give the Vols four wins this season over top-25 opponents.

The Vols are 3-1 on Tennessee’s Senior Day during the Barnes era.

UT is holding opponents to 58.1 points per game at Thompson-Boling Arena this season.

Josiah-Jordan James [5] had a plus/minus of +19 Tuesday at Kentucky and controlled the second half.

SEC Defensive Player of the Year candidate Yves Pons [7] has blocked at least one shot in every game this season.

Yves Pons [7] leads the SEC and ranks 24th nationally with 2.4 bpg. His 2.4 bpg during SEC play also leads the league.

Barring injury or illness, senior guard Jordan Bowden [2] will finish his career in the top five on Tennessee’s list for career games played. Saturday will be the 132nd game in which he’s appeared—tying him with former teammate and current NBA rookie Admiral Schofield [8] for fifth-most all-time.

Saturday will be Jordan Bowden’s [2] 99th career start. Only 13 Vols have ever logged 100 starts.

About The Auburn Tigers

Auburn is coming off consecutive losses for the third time this season after falling on the road at Kentucky (73-66) on Saturday and at home against Texas A&M (78-75) Wednesday night. The Tigers’ loss on Wednesday was their first home defeat of the season. Auburn currently sits at 24-6 (11-6 SEC).

As the regular season comes to a close on Saturday, the Tigers have already clinched a double-bye to the quarterfinals of next week’s SEC Tournament in Nashville. Auburn is the defending SEC Tournament Champion after winning four games in four days at last year’s event.

On offense, Auburn is led by senior guard Samir Doughty. Doughty’s 16.2 ppg not only leads the Tigers, but also ranks 10th in the SEC. This year he has been a consistent threat, scoring 20+ points on 10 different occasions, while pouring in a career-high 33 points back in November.

Underneath the rim is Auburn’s senior center Austin Wiley. Wiley leads the Tigers and ranks second in the SEC in rebounding with 9.3 boards per game. He’s also been a force on the defensive end, ranking fifth in the SEC with 1.6 blocks per game. Along with crashing the glass, he has also been an effective scorer, recording 13 double-doubles this season.

Since returning from injury in Auburn’s win over Ole Miss, the Tigers’ second-leading scorer and rebounder, Isaac Okoro, has made an instant impact, averaging 11.3 points per game in those contests.

The Auburn football team was coached by the famous John Heisman, the namesake of college football’s premier individual award, from 1895-1899.

A career-high 28 points from senior Jordan Bowden [2] wasn’t enough to push the Tennessee men’s basketball team past 13th-ranked Auburn, as the Vols fell, 73-66, inside Auburn Arena on February 22nd, 2020.

Bowden scored his 28 points on 9-of-12 shooting from the field, and he was 7-of-7 from the foul line. He also added a game-high six assists to his already stuffed stat line.

Junior Yves Pons [7] was efficient on the boards, pulling in a game-high 10 rebounds, with five of them coming on the offensive glass.

After a slow start from the Vols and three early baskets from Auburn, Tennessee ripped off a 15-6 run, during which UT held the Tigers without a field goal for more than five minutes of game action. The run gave the Vols an 18-14 lead at the under-12 media timeout.

As the half wore on, the Vols were balanced on offense and used timely stops to take a 41-33 lead into the halftime break. UT was propelled by 17 first-half points from Bowden.

Out of the break, hot shooting from the Vols allowed them to increase their lead to as many as 17 points in the second half’s opening six minutes.

Auburn responded, cutting into the Vols’ lead to bring the score to 54-47 in favor of the Orange & White at the period’s midpoint.

At the under-eight media timeout, the Tigers rode a 20-2 run to take a slim 57-56 lead, holding the Vols without a bucket for nearly seven minutes.

With less than two minutes remaining and the score knotted at 64, a 9-2 run, pushed the Tigers past UT.

The Incredible (All SEC) Fulk

Junior forward John Fulkerson [4] is playing at an All-SEC level in his first year as a starter, and the numbers back it up.

He ranks second in the SEC and 11th nationally with a .616 field-goal percentage this season.

Fulkerson is averaging a team-best 1.66 points per shot this season.

Prior to Tennessee’s 81-73 win at sixth-ranked Kentucky Tuesday, the Wildcats were 129-0 over the last 10 seasons when leading by double digits at halftime. That mark was blemished when UT rallied from an 11-point halftime deficit—and a 17-point deficit at the 17:31 mark in the second half—to win.

With Tuesday’s win, Tennessee has now won six of the last nine meetings in the series, and Kentucky was ranked in the top 10 for four of those wins.

Senior guard Jordan Bowden [2] is 6-4 against Kentucky during his career and stands as one of only three Vols ever to play in six or more wins over the rival Wildcats.

Bowden averaged 30.1 minutes and started seven of the 10 meetings. He averaged 7.8 points and 3.8 rebounds and totaled 12 assists, three blocks and nine steals against UK.

Bowden and junior teammates John Fulkerson [4], Yves Pons [7] and Jacob Fleschman [13] are among only 12 all-time Vols who played for teams that won multiple games at Kentucky’s Rupp Arena.