Evansville, IN – The end of the season is never fun. In the case of the 2020 Austin Peay State University (APSU) men’s basketball team, this one might sting even more than usual.

They know how good they are and how close they were. 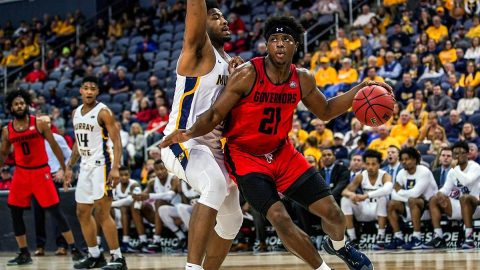 Twenty-one wins, a chance at the conference regular season title until the season’s final day and another appearance in the Ohio Valley Conference Tournament semifinals.

If you want to call it a disappointment (I wouldn’t), there are plenty of guys in that locker room who would agree with you following Friday’s 73-61 loss to Murray State at the Ford Center.

They had real plans on playing much later into March.

The APSU Govs jumped out to a 13-5 lead, making life difficult for the Racers on drives inside with active hands causing deflections and turnovers. However, back-to-back DaQuan Smith three-pointers got the Racers back into it when the Govs were flirting with an early double-digit lead.

That kickstarted a 12-0 Murray State run, with a Tevin Brown four-point play lifting the Racers into the lead. After the game was deadlocked for a time, an Austin Peay State University cold spell coupled with another 11-0 Racer run gave the rival squad a 32-21 lead at the final first-half media timeout.

After the early success, the Govs had begun to settle too much offensively. Needing to close the half strong, Austin Peay State University got a lift from Evan Hinson [1], who converted a three-point play and later nailed a three as time ran low get the APSU Govs into the break trailing 36-29.

Taylor scored 15 of his game-high 27 points in the second half, including a stretch where he scored 10 of Austin Peay State University’s 12 points over a near-10 minute portion of the second half. But with Adams battling a sore back sustained in last week’s meeting with the Racers and no other reliable option presenting itself, the Racers began to pull away during this stretch, three times getting multiple offensive rebounds on one trip down the floor before converting.

Taylor’s three-point play with 4:33 to go had the Governors within six points at 57-51, but Brown answered with a three and scored 10 points over the final four minutes to help the Racers solidify a place in Saturday’s championship game.

Having KJ Williams as a reserve is going to skew the numbers a bit; the Murray State forward leads the Racer second-unit but so adept is he that he earned first-team All-OVC for his work. He and the rest of the Murray State second-unit outscored Austin Peay State University’s subs 30-11 Friday night, with Williams (15 points) and Chico Carter Jr. (10) leading the way.

On the boards, the difference might be even starker—between Williams (11 rebounds) and Devin Gilmore (10), the Racer reserves outrebounded Austin Peay State University’s 23-1.

The loss is Austin Peay State University’s first to Murray State in the conference tournament since 2004.

The loss was APSU’s first on a Friday since last season’s OVC semifinals defeat.

Austin Peay State University struggled at the charity line down the stretch, hitting 56.1 percent (37-for-66) over the season’s final four games. The seven made free-throws Friday night equaled the team season-low for 2019-20.

The APSU Govs are now 17-8 all-time in the OVC Tournament semifinals.

Milestone Watch—Career
Taylor became the fourth Governor with 1,900 career points, joining Bubba Wells, Nick Stapleton and Drake Reed. He also took sole possession of 10th all-time with 316 career made free-throws. He’s now the 21st Division I player since the turn of the century to reach 1,900 career points before the start of his senior season.

Opening Statement
“We started out really well. We defended well early. Built an eight-point lead and then we lost Smith in the corner for two straight threes and that gave them momentum. They had two periods of big swings with offensive rebounding that really broke our back. We came out and took a lead early in the second half, but from about when it was 45-44 onward, it seemed like we were fighting an uphill battle.”

On Murray’s bench
“They won the game for them. Obviously Tevin Brown played a heck of a game, but the game was won on Murray’s bench, and we got very little contribution from our bench.”

On physicality
“It was a physical game. The referee’s let the players decide it, and I had no problem with that. I mean, do you want them to call a foul here? Sure, but so does Murray. They let the players decide it, and there were opportunities we didn’t take advantage of. They went to the glass and they capitalized in the moments we needed a stop. We would get the initial stop, and then they’d get it, and miss a shot, and get it and miss another shot and then they’d score and those possessions just broke our backs.”


Up Next For APSU Men’s Basketball

Only Hinson is scheduled to depart. Austin Peay State University men’s basketball fans have the returns of Taylor and Adams to look forward to, as well as the continued year-over-year progression for Alec Woodard [8], Carlos Paez [9] and other youngsters with bright futures. Hopefully, the best remains yet to come in Clarksville.

(And of course, you never know what postseason bids might be in store.)