Knoxville, TN – With Ohio Valley Conference play set to kick off next week, the Austin Peay State University (APSU) men’s tennis hit the road to take on No. 19 Tennessee in the penultimate non-conference match of the season, where the Governors fell to the Volunteers, 4-0, Sunday at the Goodfriend Tennis Center. 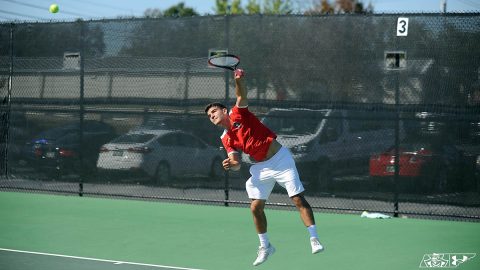 The Governors fell behind early in the match, dropping the doubles point to start. Thiago Nogueira [1] and Hunter Sanders [2] were the No. 3 pairing for the Govs, and dropped their second match together this spring.

Anton Damberg [3] and Julius Gold [4] were paired together in the No. 1 doubles position for the first time this season. Damberg and Gold saw their five-match winning streak come to an end as the Volunteers claimed the doubles point to take an early lead.

Jacob Lorino [5] and Oliver Andersson [6] were paired together for the first time this season as well, their match on the No. 2 line was left unfinished after Tennessee picked up the doubles point.

The No. 5 match-up proved to be the match-clinching point for Tennessee, who knocked off Hunter Sanders [2] to claim a 4-0 victory. With the match already won, the No. 3, 4, and 6 singles matches were left unfinished. Lorino and Andersson were trailing in the No. 3 and 4 matches, but Nogueira was tied in the second set after winning the first set in the No. 6 match.

The Austin Peay State University men’s tennis team will wrap up the non-conference season when they play a 3:00pm, Thursday, match at Southern Indiana. With rain in the forecast for Tuesday, and the Tennessee State indoor tennis courts being used for tornado relief, the Governors match against the Tigers will be postponed to a later date.