Clarksville, TN –  The Austin Peay State University (APSU) men’s tennis will wrap up non-conference play when they hit the road for a 3:00pm, Thursday, March 12th, 2020 match against Southern Indiana at the USI Tennis Courts. 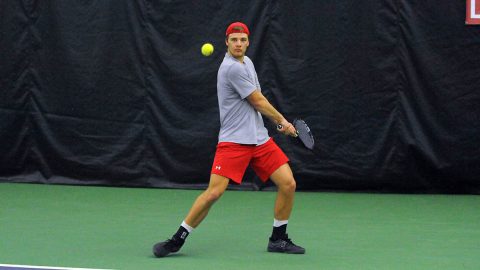 The Governors were supposed to kick off Ohio Valley Conference play, Tuesday, but that match against Tennessee State has been postponed until March 24th.

For the Governors, it has been junior Jacob Lorino [1] leading the way in doubles play. Lorino has won six-straight matches and hasn’t lost since January 31st. Dating back to the fall season, Lorino is tied with fellow junior, Christian Edison [2], with 10 total singles wins this season. For Edison, he has played exclusively on the No. 1 line for the Govs this spring, and has won four times. Lorino and Edison have also picked up four wins together while playing as the Governors No. 1 doubles pair.

Anton Damberg [3] and Julius Gold [4] have manned the No. 2 and No. 3 position for the Governors this season, with Damberg winning four times and Gold winning three. The duo have also been paired together in the No. 2 position each time out in doubles play, where they lead the Govs with a team-high five wins.

Sophomore Oliver Andersson [5] has reeled off four-straight singles wins, and ranks second on the team with five singles victories this spring. In doubles play, Andersson has spent most of the spring season paired with Hunter Sanders [6]. Sanders has won a trio of singles matches from the No. 6 position, and has won three times when paired with Andersson in doubles play.

Freshman Thiago Nogueira [7] has picked up one singles win in three attempts this spring, and was on pace from another win at Tennessee when his match was left unfinished. In doubles play, Nogueria has played with both Andersson and Sanders, but he is still searching for his first doubles win of the spring.