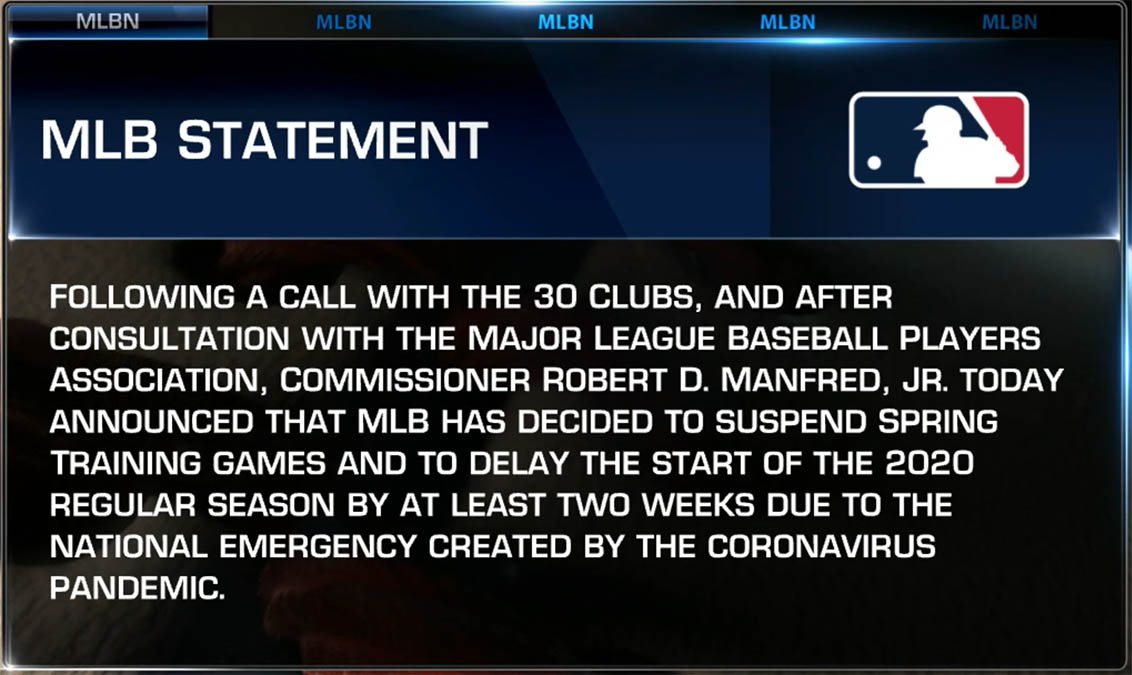 New York, NY – Major League Baseball has cancelled the remainder of its Spring Training games, also announcing that the start of the 2020 regular season will be delayed by at least two weeks due to the national emergency created by the coronavirus pandemic.

The decision was announced following a call with all 30 Clubs and after consultation with the Major League Baseball Players Association. Opening Day was originally scheduled for Thursday, March 26th, 2020. 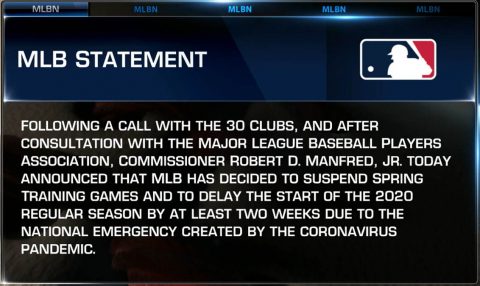 MLB said the action “is being taken in the interests of the safety and well-being of our players, Clubs and our millions of loyal fans.”

The league will continue to evaluate ongoing events leading up to the start of the season. Guidance related to daily operations and workouts will be relayed to Clubs in the coming days.

MLB and its Clubs have been preparing a variety of contingency plans regarding the 2020 regular-season schedule. The league plans to announce the effects on the schedule at an appropriate time, though MLB also said it “will remain flexible as events warrant, with the hope of resuming normal operations as soon as possible.”

“Nothing is more important to us than the health and safety of our players, employees and fans,” the league said in its announcement. “MLB will continue to undertake the precautions and best practices recommended by public health experts. We send our best wishes to all individuals and communities that have been impacted by coronavirus.”

The National Hockey League and Major League Soccer also announced Thursday that they have suspended their seasons. The National Basketball Association suspended its regular season on Wednesday night for at least 30 days, a move which came after Rudy Gobert of the Utah Jazz tested positive for coronavirus. Thursday, a second Utah player — Donovan Mitchell Jr. — also tested positive.

Additionally, the NCAA announced that all winter and spring sport seasons have been cancelled, meaning that there will be no men’s or women’s NCAA basketball tournament this year, and no men’s and women’s College World Series.

“This is an unprecedented time and this is certainly an unprecedented decision that was made in the best interest of players, fans and communities across the country,” Marlins CEO Derek Jeter said in a statement.

The 2020 World Baseball Classic Qualifier games scheduled to be played in Tucson, AR, have also been postponed indefinitely, and Minor League Baseball announced that it is postponing its Opening Day — originally scheduled for Thursday, April 9th — to a to-be-determined date. Multiple teams had already pulled their scouts off the road as a result of this public health crisis.

“We want to go out there and we want to play, but at the same time, lives are at risk and looking at the bigger picture, we need to stay clear of everyone out there because this is just how crazy this thing is,” said Rays outfielder Kevin Kiermaier.

“I don’t have a whole lot of education on it, I just know that it’s nothing to joke around with and I think that’s pretty safe to say. Never thought anything like this would ever happen, but once again, we have to adapt to what we’re asked of and try to do each and every thing possible to look out for ourselves, our families, the people around us that we’re keeping contact with until this slows down and hopefully that’s sooner than later,” Kiermaier stated.

Some teams have already decided to keep their spring facilities open in the coming days and weeks. D-backs owner Ken Kendrick said the team will make its facility at Salt River Fields in Scottsdale open to players beginning Friday, with full services available, including trainers and food. The Brewers have an optional workout scheduled for Friday, and another one tentatively planned for Monday.

“It’s unfortunate, but I think it’s the proper measure we need to take now given the situation the country’s in and the world’s in,” Yankees outfielder Giancarlo Stanton told reporters at George M. Steinbrenner Field in Tampa, FL. “It’s important to know that some things are bigger than baseball, bigger than sports. Once we’re able to hopefully get a hold on some things and get some questions answered, we can figure out when things can continue.”

Mariners CEO John Stanton said players will remain at the team’s spring complex in Peoria to work out until the regular season begins, though there will be no public access to the workouts.

“Players are of course disappointed they won’t be able to compete on the field,” Major League Baseball Players Association executive director Tony Clark said in a statement. “At the same time, they recognize the importance of public health and safety.”

Mark Feinsand, an executive reporter, originally joined MLB.com as a reporter in 2001.