Clarksville, TN – The Montgomery County Sheriff’s Office with the assistance of the Clarksville Police Department and Tennessee Highway Patrol apprehended three adults and two juveniles in connection to a gun store burglary.

The burglary occurred at JMC Firearms in Paris, Tennessee at approximately 4:28am on Monday, March 16th, 2020. The suspect vehicle was pursued by the Stewart County Sheriff’s Office and was picked up by Montgomery County Deputies at the Stewart and Montgomery County line on Dover Road. Deputies effectively deployed spike strips as the vehicle continued east on Dover Road. 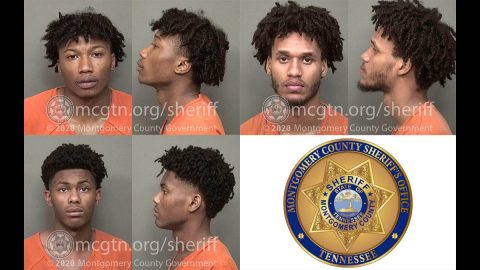 The pursuit continued north onto the 101st Airborne Division Parkway where the CPD effectively deployed a second set of spike strips.

The vehicle left the roadway near Bevard Road and five suspects fled on foot. Montgomery County Deputies, Clarksville Police Officers, and THP Troopers quickly secured a tight perimeter around the area, and after a search, arrested all five suspects. Sixteen firearms were recovered from the scene or in the possession of a suspect.

Anthony James Bermudez, and Dontarious Davell Sales, both 18, was taken custody and charged with evading, two counts of contributing to the delinquency of a minor, and possession of stolen property (firearms). Bonds for both Bermudez and Sales were set at $35,000 each.

Both juveniles were detained pending a hearing in Juvenile Court and additional charges are also pending from neighboring law enforcement agencies.

“Five law enforcement agencies were involved in the successful apprehension of these suspects. Collective and effective communication, focus, and teamwork were displayed by all agencies involved. I could not be more proud of the job that was done to get these criminals off the streets and I know that our community is equally proud of their hard work,” said Montgomery County Sheriff John Fuson.

“The arrest could not have been possible without a citizen who stepped up, saw something, and said something,” said Paris Police Department Captain Ricky Watson. “The City of Paris would like to thank all departments who took part in the apprehension of the subjects responsible for this burglary. This was a group effort and we appreciate the support of citizens and fellow law enforcement.”

Anyone with any information concerning this crime is asked to call Investigator Marc McElroy at 931.648.0611 ext 13421 or submit a tip with the new MoCoInfo App.