Nashville, TN – The Nashville Sounds Baseball Club have announced plans to continue virtual entertainment for fans with the “Safe and Sounds at Home” campaign during the Coronavirus (COVID-19) pandemic and suspension of Minor League Baseball games being played.

“Safe and Sounds at Home” will begin Thursday, April 9th in place of the originally scheduled Opening Day contest against the Iowa Cubs. The engaging creative campaign will continue until Minor League Baseball announces the start of the 2020 season and baseball returns to First Horizon Park. 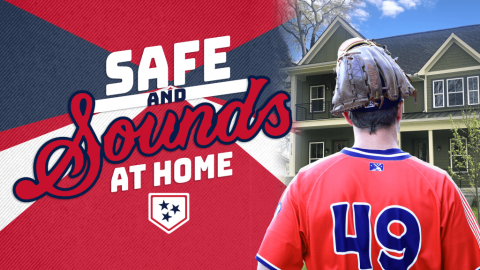 “During this extremely difficult time for people around the world, we want to do our part to encourage everybody to stay home if at all possible,” said Sounds General Manager Adam Nuse. “Safe and Sounds at Home gives our fans the feeling of being at First Horizon Park as much as possible until we get started. We want to encourage our fans to interact as much as possible and help make the best out of this unfortunate situation.”

In place of every originally scheduled game, the Sounds will participate in MLB The Show simulations complete with highlight reels and Player of the Week awards.

Other elements to be included are Tito’s Tail Waggin’ Tuesdays and Winning Wednesdays presented by Pepsi, among others.

Media entities wishing to speak with Nashville Sounds General Manager Adam Nuse about the “Safe and Sounds at Home” campaign can contact Director of Media Relations, Chad Seely, ( [1]) to schedule a time.

The Nashville Sounds are the Triple-A affiliate of the Texas Rangers and play at First Horizon Park. The 2020 season will begin at a date yet to be determined by Minor League Baseball.