Clarksville, TN – Normally, the ESPEAY’s serve as the end-of-year night of pomp and circumstance to celebrate the best and brightest Austin Peay State University (APSU) athletics has to offer.

Obviously, these are not normal circumstances. So social media was the spot to find the honors for a slimmed-down ESPEAY’s for the 2019-20 year, which saw the bulk of awards handed out Wednesday night on Austin Peay State University’s official Twitter and Instagram pages. 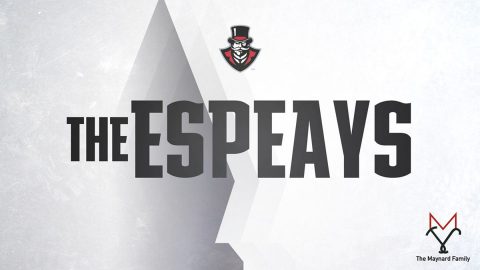 Savannah Amato and Kyle Anderton were the big winners for the year; Anderton took the Male Legends Award honor, while Amato was the Female Legends honoree and the Govs Spirit victor.

Anderton arrived on campus and made an immediate impact, anchoring the Govs’ offensive line and earning second-team All-Ohio Valley Conference in the season after her transferred from Vanderbilt. That coincided with one of the greatest turnarounds in Austin Peay State University history, with the Govs going 8-4 following an 0-11 campaign.

Anderton’s 2019 season saw him as the elder statesman of an offensive line that led the way to Austin Peay State University’s first OVC championship since 1977. He earned a passel of awards for his work, including first-team All-OVC, second-team All-American honors from both the Associated Press and STATS Inc. and third-team honors from HERO Sports.

During Anderton’s three seasons, Austin Peay State University set or tied 18 single-season or single-game school records just on the offensive side of the ball alone.

Amato was a model student-athlete during her time at Austin Peay State University, graduating in 2019 and working toward a master’s degree while rehabbed and trained for the 2020 outdoor season. Although thwarted by COVID-19 Coronavirus, Amato’s career remains a testament of great works.

A three-time NCAA East Preliminary participant, Amato won six-straight gold medals in OVC Championship competition from the 2016 outdoor season through the 2019 indoor season. She owns half of the top-10 indoor pole vault marks in APSU history and eight of the 10 best outdoor vaults, in addition to the school record in both disciplines.

Amato was tabbed OVC Female Field Athlete of the Week 11 times in her APSU career, winning 26 individual titles. She was pretty good away from the field of competition as well, earning the OVC Academic Medal of Honor three times in her career.

Between Amato and the track and field team earning the coveted Govs Cup, given annually to the program which best combines athletic and academic achievement, community service and attendance at Austin Peay State University sporting events, it was a good night for the 2020 OVC Indoor Champions. Softball also racked up as well, with Emily Moore earning the Perkins Freeman Academic Award and #Team35 itself earning the Community Service Award.

Below is a complete list of awards given out for the 2020 ESPEAY’s, as well as short videos from both Legends Award recipients.

Donor of the Year: Bobby and Betty Mills