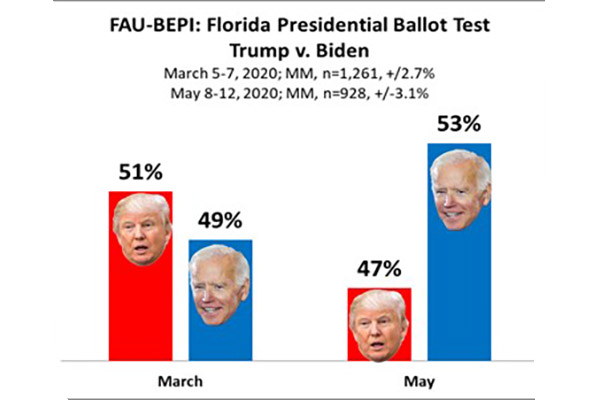 Biden polled at 53 percent to Trump’s 47 percent, a reversal from the March survey, when Trump narrowly led Biden. 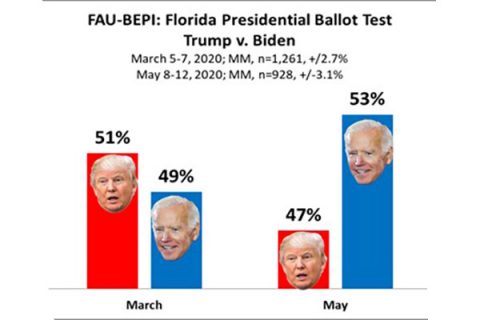 Still, 53 percent of respondents say the president will beat Biden in November. Meanwhile, 78 percent of Trump supporters say they’re excited for their candidate, while 64 percent of Biden supporters report excitement.

“While Joe Biden does not seem to generate the enthusiasm that past candidates have garnered, it might not matter,” said Kevin Wagner, Ph.D., a professor of political science at FAU and a research fellow of the Initiative. “Many Democrats seem motivated by the desire to defeat President Donald Trump.”

Respondents were evenly split at 45 percent on Trump’s handling of the coronavirus crisis. His overall approval rating dropped to 43 percent, while his disapproval rose to 46 percent. In March, his approval was at 49 percent and his disapproval at 41 percent.

The most important issue for voters is the economy (28 percent), followed by someone who can beat Trump (20 percent), health care (18 percent), re-electing Trump (13 percent) and immigration (12 percent).

“For independents in Florida, this election is not about beating or re-electing Donald Trump like it is for partisans,” said Monica Escaleras, Ph.D., director of FAU BEPI in the College of Business. “Instead, these voters are looking for solutions to immigration, the economy and health care.”

The survey of 928 registered Florida voters was conducted May 8th-12th.