Washington, D.C. – The White House is publishing this email that was received from Twitter. It’s so absurd, the White House had to share it with the public.

That is completely false.

As the President just explained again, his tweet was CONDEMNING violence and pledging federal support to keep Minnesotans safe.

The email we just received, presumably sent by a different team within Twitter, admits that the very tweet they are censoring does not violate any Twitter Rules.

Twitter’s own staff just made this much clear: Twitter is a publisher with an editorial viewpoint, NOT a platform.

See the email below for yourself: 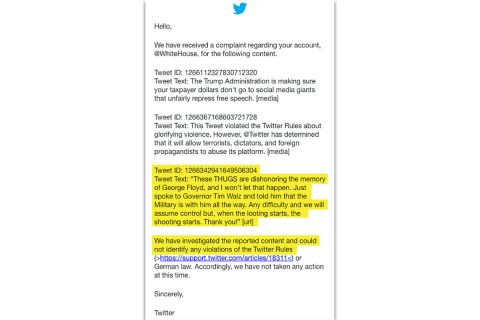