Tampa, FL – The national gas price average is $1.97, just one penny more expensive than last week. Part of the incremental jump can be attributed to increases in gasoline demand, which saw a 7% week-over-week increase.

However, demand is still down nearly 25% compared to last year, according to the Energy Information Administration’s (EIA) latest reports.

“The good news is gas is still cheap. Motorists can fill-up for $2.00/gallon or less at 70% of gas stations across the country,” stated Casselano.

Today’s national average is 20 cents more than a month ago, but 85 cents less than a year ago. 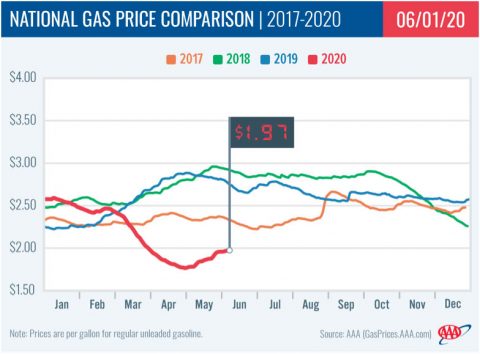 Pump prices saw very modest increases or decreases on the week – two cents or less – in the Great Lakes and Central states, with the exception of South Dakota (+6 cents). State averages in the region range between as low as $1.65 in Missouri to as expensive as $2.22 in Illinois. Both of these states rank among the top 10 least and most expensive state averages, respectively, in the country.

Compared to a year ago, motorists are seeing pump price savings of roughly 80 – 95 cents.

The region’s refinery utilization rate saw the largest jump of any in the country, increasing by 4%. At 77%, it is also the highest rate among all regions. It contributed to a 300,000 bbl build in Great Lakes and Central States stocks, to total 55 million bbl. According to EIA data, gasoline stocks have surpassed year-ago levels (of nearly 48 million bbl).

All South and Southeast states saw pump price jumps on the week with the majority seeing increases of a penny or two. New Mexico (+7 cents) was the outlier in terms of price increases.

Gas prices continue to average well below $2.00/gallon across the region. Florida ($1.88) carries the highest average. Motorists can find gas for $1.75 or less at 68% of stations in the region.

While gasoline stocks drew by 1.1 million bbl, total stock levels (89 million bbl), sit at a more than 4 million bbl year-over-year surplus. Stocks could see an increase next week as refinery rates jumped 2% up to 74%. Motorists can expect continued increases, though not spikes, at the pump.

On the week, the region saw gas prices push more expensive, though mostly by one to two cents. Washington, D.C. (-6 cents) was the only state in the region to see a decrease.

Gasoline stocks have steadily increased throughout the month of May. The latest build – nearly 2 million bbl – pushes total levels to close to 74 million bbl. That is a near-high mark for stocks in the region this year. More so, stock levels sit at a 10 million bbl year-over-year surplus. However, refinery rates are still low, sitting at 50%. 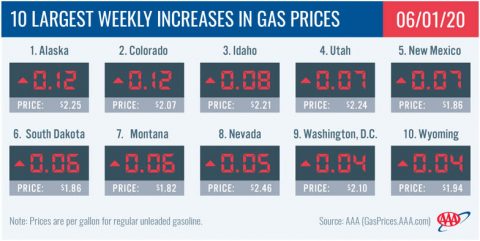 According to EIA’s latest weekly report, total gas stocks in the region decreased from 31 million bbl to 29.2 million bbl last week. Decreasing stocks may help to lift pump prices this week, if demand continues to rebound in the region.

At the end of Friday’s formal trading session, WTI increased by $1.78 to settle at $35.49 per barrel. At the end of last week, crude prices spiked amid increased market optimism that demand for crude oil and refined products from it, including gasoline, may be rebounding.