Washington, D.C. – For the first time, a spacecraft has sent back pictures of the sky from so far away that some stars appear to be in different positions than we’d see from Earth.

More than four billion miles from home and speeding toward interstellar space, NASA’s New Horizons has traveled so far that it now has a unique view of the nearest stars.

“It’s fair to say that New Horizons is looking at an alien sky, unlike what we see from Earth,” said Alan Stern, New Horizons principal investigator from Southwest Research Institute (SwRI) in Boulder, Colorado. 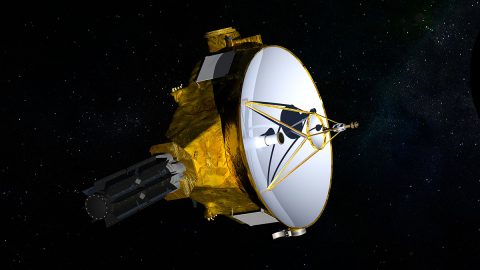 “And that has allowed us to do something that had never been accomplished before — to see the nearest stars visibly displaced on the sky from the positions we see them on Earth,” Stern stated.

On April 22nd-23rd, the spacecraft turned its long-range telescopic camera to a pair of the “closest” stars, Proxima Centauri and Wolf 359, showing just how they appear in different places than we see from Earth. Scientists have long used this “parallax effect” – how a star appears to shift against its background when seen from different locations — to measure distances to stars.

An easy way to see parallax is to place one finger at arm’s length and watch it jump back and forth when you view it successively with each eye. Similarly, as Earth makes it way around the Sun, the stars shift their positions. 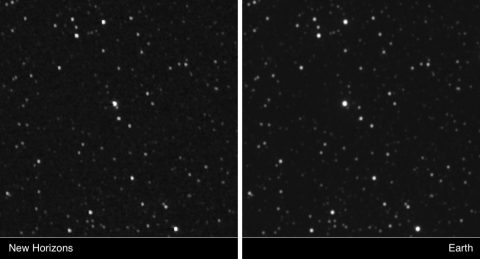 These two frames of Proxima Centauri are images from New Horizons and Earth of each star, clearly illustrating the different view of the sky New Horizons has from its deep-space perch. (NASA)

But because even the nearest stars are hundreds of thousands of times farther away than the diameter of Earth’s orbit, the parallax shifts are tiny, and can only be measured with precise instrumentation.

“No human eye can detect these shifts,” Stern said.

But when New Horizons images are paired with pictures of the same stars taken on the same dates by telescopes on Earth, the parallax shift is instantly visible. The combination yields a 3D view of the stars “floating” in front of their background star fields. 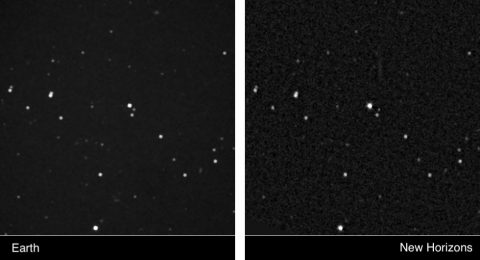 Theses two frames of Wolf 359 are images from New Horizons and Earth images of each star, clearly illustrating the different view of the sky New Horizons has from its deep-space perch. (NASA)

Lauer, New Horizons Deputy Project Scientist John Spencer, of SwRI, and science team collaborator, astrophysicist, Queen guitarist and stereo imaging enthusiast Brian May created the images that clearly show the effect of the vast distance between Earth and the two nearby stars.

“It could be argued that in astro-stereoscopy — 3D images of astronomical objects – NASA’s New Horizons team already leads the field, having delivered astounding stereoscopic images of both Pluto and the remote Kuiper Belt object Arrokoth,” May said. “But the latest New Horizons stereoscopic experiment breaks all records. These photographs of Proxima Centauri and Wolf 359 – stars that are well-known to amateur astronomers and science fiction aficionados alike — employ the largest distance between viewpoints ever achieved in 180 years of stereoscopy!”

Stereo for 3D Glasses: These anaglyph images can be viewed with red-blue stereo glasses to reveal the stars’ distance from their backgrounds. On the left is Proxima Centauri and on the right is Wolf 359. (NASA)

“The professional and amateur astronomy communities had been waiting to try this, and were very excited to make a little space exploration history,” said Lauer. “The images collected on Earth when New Horizons was observing Proxima Centauri and Wolf 359 really exceeded my expectations.”

Download the images (and learn more about creating and posting your own parallax perspectives) at http://pluto.jhuapl.edu/Learn/Parallax/Parallax-Images.php [2]

Throughout history, navigators have used measurements of the stars to establish their position on Earth. Interstellar navigators can do the same to establish their position in the galaxy, using a technique that New Horizons has demonstrated for the first time. While radio tracking by NASA’s Deep Space Network is far more accurate, its first use is a significant milestone in what may someday become human exploration of the galaxy.

At the time of the observations, New Horizons was more than 4.3 billion miles (about 7 billion kilometers) from Earth, where a radio signal, traveling at the speed of light, needed just under 6 hours and 30 minutes to reach home.

Launched in 2006, New Horizons is the first mission to Pluto and the Kuiper Belt. It explored Pluto and its moons in July 2015 — completing the space-age reconnaissance of the planets that started 50 years earlier — and continued on its unparalleled voyage of exploration with the close flyby of Kuiper Belt object Arrokoth in January 2019. New Horizons will eventually leave the solar system, joining the Voyagers and Pioneers on their paths to the stars.