Tampa, FL – Americans are filling up at the pump more and more. Since mid-May, gasoline demand has increased 18% to 7.9 million b/d, according to the latest Energy Information Administration (EIA) report.

The slow, but steady rise in demand has pushed the national pump price more expensive by 13% in the same time frame. Today’s national average is $2.10. That is seven cents more on the week, 24 cents more on the month, but 59 cents cheaper on the year.

Prices at the Gas Pump continue to climb with increased demand. (AAA)

“Higher demand will contribute to increasing gas prices in the coming weeks, but they aren’t going to spike to typical summer prices. That’s because demand won’t be sufficient enough to drive down stocks levels. Gasoline stocks sit at a significant surplus of nearly 24 million bbl year-over-year,” Casselano stated.

Today, only one-third of state averages are $1.99 per gallon or less and the majority of those are states in the South and Southeast. 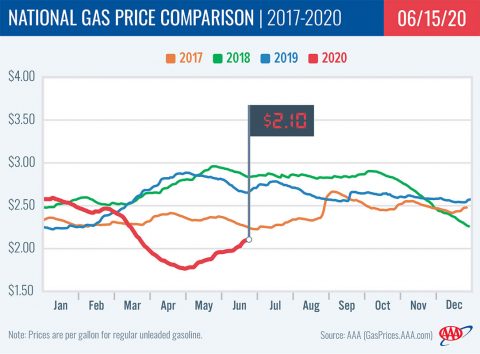 Motorists in the Rockies region are enjoying some of the largest year-over-year pump price savings. Four of the five states land on the top 10 list for largest yearly difference: Idaho (-84 cents), Montana (-84 cents), Utah (-84 cents) and Wyoming (-80 cents). Coloradoans are seeing a savings, but at a much lower amount of about 50 cents less from last June.

On the week, Rockies states saw gas price averages increase from a few pennies to double-digits. At 12 cents, Colorado and Montana had some of the largest jumps and land on the country’s top 10 list. With this week’s increases, all states in the Rockies have averages of $2.03/gallon or more.

Regional gasoline stocks held steady at 7.6 million bbl, but EIA data shows regional refinery utilization increased by 6% up to 77%. The Rockies region has the second highest refinery rate in the country. Should stocks increase that would help to minimize large pump price jumps in coming weeks. 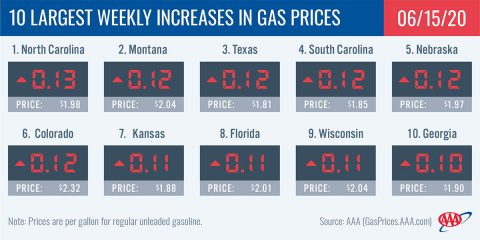 According to EIA’s latest weekly report, total gas stocks in the region increased slightly from 29.8 million bbl to 30.1 million bbl last week. Increasing stocks, alongside increasing demand, may help to slow pump price increases this week in the region.

The large price swings are surprising given that regional gasoline stocks and refinery utilization both held steady on the week at 54 million bbl and 75%, respectively, according to EIA data. Typically large jumps at the pump coincide with a large draw in stocks. However, this region typically sees high volatility in price swings from week to week. It’s likely many of the states which saw large increases in the last week will see smaller increases in the week ahead.

Louisiana ($1.76) and New Mexico ($1.97) were the only states in the South and Southeast region to not see double-digit increases at the pump. All other states saw gas prices push more expensive by 10 to 12 cents, with Texas (+12 cents), South Carolina (+12 cents) and Florida (+11 cents) seeing the largest increases. These three states also land on the top 10 list for largest weekly increases in the country.

On the week, gasoline stocks built by only 100,000 bbl, to 91.7 million bbl. Refinery utilization rates were reported by the EIA at nearly 78%, a small 2% increase from the week prior. The small increases in stocks and refinery rates would typically mean smaller increases at the pump, especially with a utilization rate that is at its highest point in two months. Motorists could expect to see prices increase at a slower rate in the week ahead given these latest spikes.

While pump price volatility in the Mid-Atlantic and Northeast is low compared to other regions, within the region there were significant pump price jumps on the week. West Virginia ($2.03) and Virginia ($1.86) saw the largest increases at nine cents and seven cents, respectively, followed by Maryland (+7 cents) and Kentucky. New York (+1 cent), which just started to open up in the last week, saw the smallest increase.

With a nearly 1 million bbl build, regional gasoline stocks sit at 75.1 million bbl. That is the second highest stock level in the country and the highest level for the region since February 2017. It’s likely the region could see continued spikes at the pump in the week ahead as demand builds and motorists return to the road in larger numbers.

At the end of Friday’s formal trading session, WTI decreased by eight cents to settle at $36.34 per barrel. Domestic crude prices decreased last week amid increased market concern that an increase in new coronavirus infections could lead to another reduction in crude demand.