On the field, he’s a box truck with legs, a 5-9, 285-pound mountain of a man who broke out in a big way in 2019 as a key member of the interior line for an Austin Peay State University program that won its first Ohio Valley Conference title since 1977. 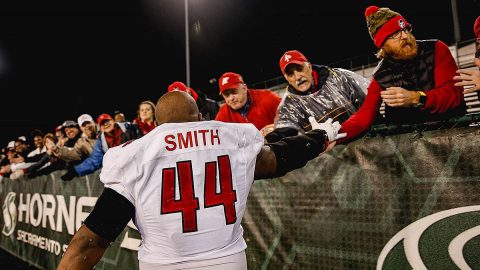 Off the field, he’s a doting father to Skylar and husband to Shermiria. In May, they welcomed a second daughter, Madison, into the world. This is where Smith’s off-field toughness comes into play.

Madison was born with Congenital Diaphragmatic Hernia (CDH), a rare abnormality that happens to 1 in 2500 babies. According to the National Institutes of Health, CDH is, “a condition present before birth characterized by abnormal development of the diaphragm. The diaphragm normally separates the organs in the abdomen from those in the chest.

The severity of CDH may range from a thinned area in part of the diaphragm, to its complete absence. CDH may allow the stomach and intestines to move through an opening (hernia) into the chest cavity, crowding the heart and lungs. This can then lead to underdevelopment of the lungs (pulmonary hypoplasia), which may cause life-threatening complications.”

“You have to be strong for the family during this,” Smith said. “This has been difficult. We never know what’s next with Madison. [But] the support from everyone in our circle has been the biggest thing.”

When the Smith’s went to find out the gender of their baby in February, they were informed that Madison had CDH. To top it off, Shermiria developed severe preeclampsia in April, for which the only cure would be delivery. At 29 weeks, for a baby with CDH, Madison would be too small to go on Extracorporeal Membrane Oxygenation (ECMO), which would greatly increase her chances of survival

But the Smith’s weren’t going to let the odds stop them. As soon as Madison was diagnosed with CDH, Shermiria went to work researching the disease and how to fight for their daughter, finding resources to help them make the best decisions possible for her. 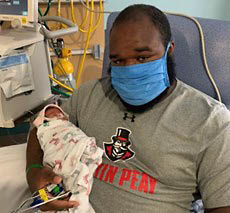 Josephus Smith and his daughter Madison

“My wife is a researcher,” Smith said. “The day we found out about CDH, she went home and researched it. A lot of doctors don’t know much about it. She found a group on Facebook for CDH parents talking about this doctor in Florida [Dr. David Kay]. The worldwide rate of success for severe CDH is 50 percent; he’s 95 percent successful.

“One CDH parent told us, ‘Take your child where you feel comfortable, where you think they’ll have the best chance.’ That stuck with us, and that helped in our decision to come to Florida.”

At 31 weeks, Shermiria was back at Vanderbilt University Medical Center, with preeclampsia symptoms still wracking her body.

“Her [Shermiria] blood pressure shot up, and then the doctor came in,” Smith said. “She said if Madison was born right then, there was nothing they could do for her.”

They prayed. They talked to family and friends. And they decided to take the chance and make the 10-hour drive, to John Hopkins All Children’s Hospital in St. Petersburg, Florida. To Dr. David Kay, who they believed would give their daughter her best chance.

“That Sunday we got on the road for Florida,” Smith said. “If it causes us to go into debt, so be it; we’d still have our daughter.”

The couple, along with Skylar, have been in Florida since May 10th. On May 20th, Madison was born; six days later, she was in surgery. She’s been hospitalized ever since but has, in the face of long odds, made significant progress.


“Madison is doing pretty good,” Smith said. “Now we’re trying to get her to gain weight and continue to eat well. We’re hoping to go home sometime this week, but the thing with CDH is you can’t get too excited because anything can happen. Some of the nurses and doctors don’t know how she’s doing so well. She’s one of the smallest babies they’ve ever had to be doing so well. She didn’t need ECMO; she came out thriving, for a baby born premature.

“My coaches and teammates have been amazing, reaching out, asking how they can help. It’s meant a lot to us.”

The fight will continue. Children born with CDH can have issues into infancy. Bills have piled up, at home and in Florida (you, dear reader, can help at the NCAA-approved link accompanying this article, both at the top of the page and right here [2]), straining the finances of two college students. The battle isn’t over, but already Madison has shown the ability to fight through anything.

“She’s been in a fight since she got here,” Smith said. “At Vanderbilt, they only gave her a 28 percent chance at life. She’s doing better than most babies in this type of situation. The hardest thing is seeing her on the ventilator, with the tube in her throat. You can see it in her face, she’s crying, she’s in pain, and we can’t pick her up and hold her and comfort her. That’s been the hardest part.