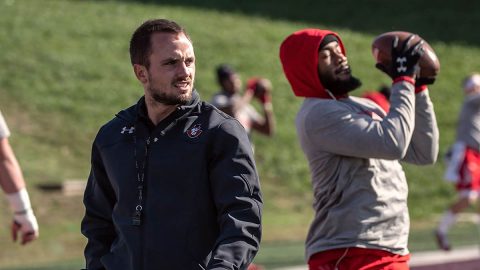 “Chris and I have won bowl games together,” said Lovings. “He runs one of the most important aspects of our program. I know we will be completely aligned with the development of our young men from a strength, speed, sport science and injury prevention philosophy.”

“I have watched Kevin develop from a student assistant to a graduate assistant to a full-time coach,” Lovings said. “I have also won multiple bowl championships with him. We will be totally aligned from what I envision from our front four.”

Jordan Frazier [4], who was the Governor’s director of football operations last season, will move into an on-field role as special teams coordinator. It will be Frazier’s first full-time coaching position after working with the special teams units at Louisiana Lafayette first as a student assistant, then graduate assistant and finally as quality control specialist from 2014-18.

“Jordan has a devoted his entire coaching life to special teams and he will have relentless passion in his job,” Lovings said. I really can’t wait to see him shape our special teams.”

Keith Scott [6] will add assistant special teams coordinator to his responsibilities as nickel backs coach. The 11-year coaching veteran as held coaching assignments across the entire spectrum the defensive unit, including time as the defensive coordinator at Arkansas-Monticello (2011-15) and Mississippi Valley State (2009).

“Having been around Keith for a year, I have seen his presence resonate throughout our defense,” Lovings said. “I can’t wait until we allow him to coach everyone on special teams. Our team will benefit from him engaging with all our student-athletes on a day to day basis.”

Camie Cole Nations [7], who was Austin Peay State University’s on-campus recruiting coordinator last season, will add director of football operations to her title for 2020. The new position will take advantage of Cole Nations’ previous experience both at APSU and at Mississippi State where she was the team’s academic athletics tutor and recruiting graduate assistant, helping the Bulldogs land a Top 15 recruiting class in 2018.

“I observed her professionalism and prowess while working together on things related to admissions,” said Lovings. “She will be communicating with me on a day-to-day basis. I am happy to have someone as experienced and as well versed as Camie managing our operations.”