President Donald Trump: Rapid progress on a vaccine and therapeutics [1] 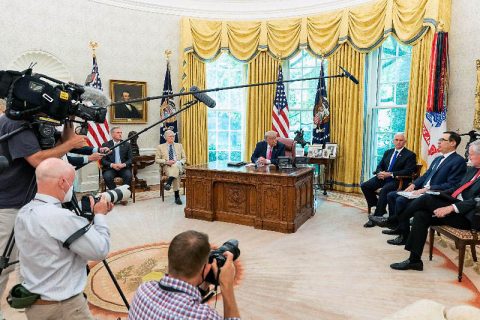 The focus is “really about kids and jobs and vaccines,” Secretary Mnuchin said. “We’re going to make sure that we have a vaccine by the end of the year for emergency use.”

Vice President Pence reiterated that the best way to help Americans is to make sure that schools and businesses can safely reopen soon.

“We’ll make sure our healthcare workers and our states have the resources that they need. But also, Mr. President, we’re going to continue to advance policies that’ll make it possible for us to open up America again and open up America’s schools.”

The historic, nationwide ramp-up to fight Coronavirus—which includes the largest mobilization of U.S. industry since World War II—is making America a global leader in addressing the pandemic. Thanks to President Trump’s efforts to accelerate ventilator production, for example, the United States now has a surplus of these crucial machines.