Greenbelt, MD – NASA says storage is just as important aboard the International Space Station [1] as it is on Earth. While the space station is about the size of a football field, the living space inside is much smaller than that.

Just as you wouldn’t store garden tools in a house when you could store them in a shed outside, astronauts now have a “housing unit” in which they can store tools for use on the exterior of the space station. 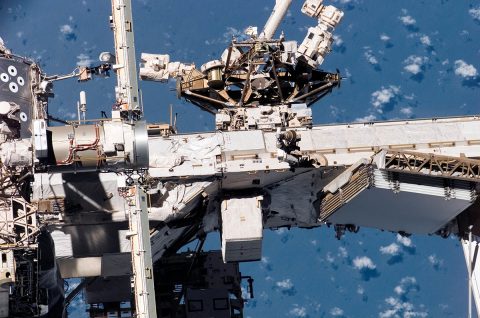 The Mobile Base System moves on the Mobile Transporter rail car along truss rails covering the length of the space station. It provides a movable platform for Canadarm2 and Dextre and can access any of eight worksites that feature power connections. (NASA)

On December 5th, 2019, a protective storage unit [2] for robotic tools called Robotic Tool Stowage (RiTS) was among the items launched to station as part of SpaceX’s 19th commercial resupply services mission for NASA.

As part of a spacewalk on July 21st, NASA astronauts Robert Behnken and Chris Cassidy installed the “robot hotel” where the tools are stored to the station’s Mobile Base System [3] (MBS), where it will remain a permanent fixture.

The MBS is a moveable platform that provides power to the external robots.

This special location allows RiTS to traverse around the station alongside a robot that will use the tools it stores. 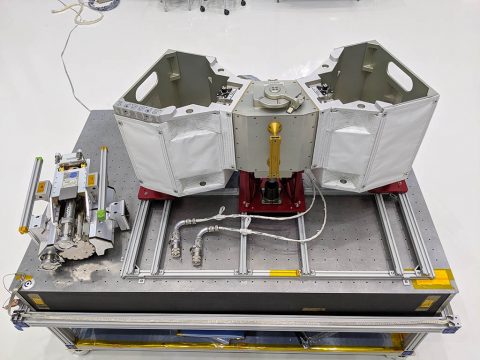 “RiTS provides thermal and physical protection for tools stored on the outside of station, not only freeing up room on board but also allowing the Canadian Space Agency’s Dextre robot to access them more quickly,” said RiTS Hardware Manager Mark Neuman. 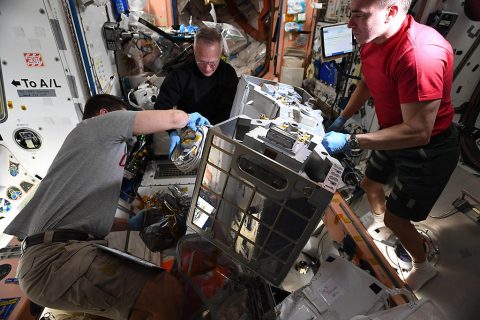 The first step in the RiTS installation process involved preparing the unit inside the space station. The astronauts unpacked RiTS’ occupants from storage – two units of a tool called the Robotic External Leak Locator (RELL) [4] – and affixed them inside RiTS’ aluminum housing.


“RELL is a great example how robots with the right tools can simplify life for astronauts,” said Neuman. “Dextre can use RELL to detect ammonia leaks, eliminating the need for astronauts to perform the same task during a spacewalk.” 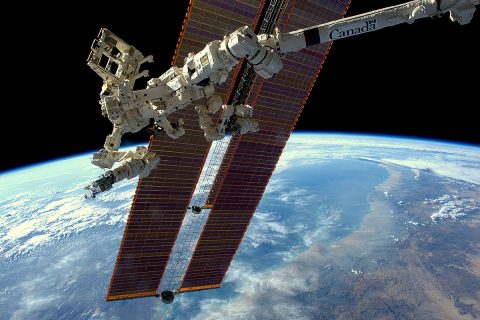 The Robotic External Leak Locator on the end of the Dextre robot in February 2017. (NASA)

The ability to locate and repair ammonia leaks [6] efficiently is important since ammonia is used to operate station’s cooling system.

The installation of RiTS makes the leak location process much more streamlined. Before RiTS, the RELL tools were stored inside the station, and deploying RELL depended on airlock availability and involved waiting an additional 12 hours to allow for RELL’s gas analyzer to clear itself of internal gases. With RiTS, the only variable is Dextre’s availability, expediting the search for leaks.


After it was prepared on station, RiTS – loaded with the two RELL units – was sent outside with the spacewalking astronauts who attached it to the MBS. This was the first task during a spacewalk [8] to upgrade International Space Station [1] systems.

The installation required the astronauts to mechanically attach RiTS to an available worksite socket then mate two electrical cables to unused power outlets on the MBS. The power connection was critical to enabling heaters within RiTS that keep the RELL tools from getting too cold. 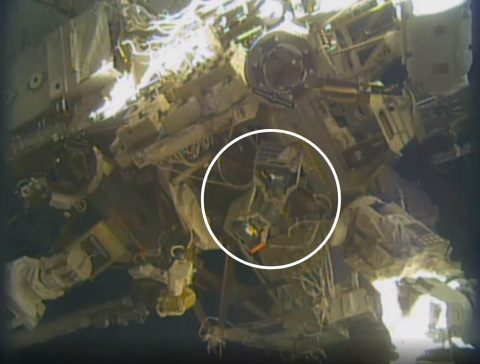 Although RiTS will be used on the station, human-robot collaborations like this have the potential to be applied to other endeavors that involve human habitats in space, including Gateway [9].