Pasadena, CA – NASA is preparing to send the first woman and next man to the Moon [1], part of a larger strategy to send the first astronauts to the surface of Mars. But before they get there, they’ll be faced with a critical question: What should they wear on Mars, where the thin atmosphere allows more radiation from the Sun and cosmic rays [2] to reach the ground?

Amy Ross is looking for answers. An advanced spacesuit designer [3] at NASA’s Johnson Space Center in Houston, she’s developing new suits for the Moon and Mars. 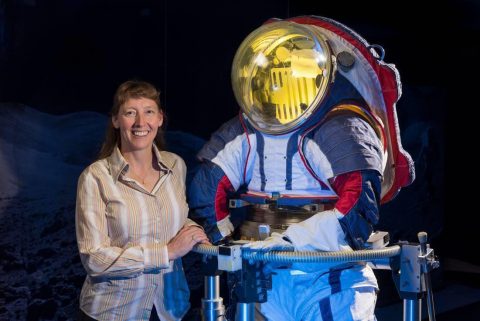 So Ross is eagerly awaiting this summer’s launch of the Perseverance Mars rover [4], which will carry the first samples of spacesuit material ever sent to the Red Planet.

While the rover explores Jezero Crater [5], collecting rock and soil samples for future return to Earth, five small pieces of spacesuit material will be studied by an instrument aboard Perseverance called SHERLOC (Scanning Habitable Environments with Raman & Luminescence for Organics & Chemicals). The materials, including a piece of helmet visor, are embedded alongside a fragment of a Martian meteorite [6] in SHERLOC’s calibration target [7].

That’s what scientists use to make sure an instrument’s settings are correct, comparing readings on Mars to base-level readings they got on Earth.

Read on as Ross shares insights into the materials chosen and the differences between suits [8] designed for the Moon and those for Mars. More information about SHERLOC and the rover’s science can be found here [9]. 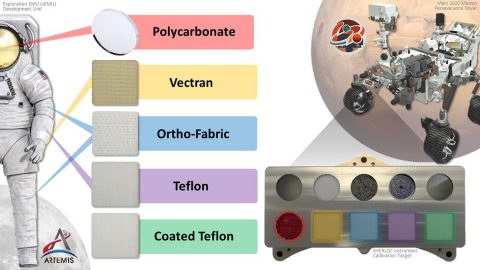 This graphic shows an illustration of a prototype astronaut suit, left, along with suit samples included in the calibration target, lower right, belonging to the SHERLOC instrument aboard the Perseverance rover. They’ll be observed to see how they hold up in the intense radiation of the Martian surface. (NASA)

Why were these particular materials on SHERLOC’s calibration target selected?

Ross: The materials we’re poking at the most are meant to be on the outer layer of a suit, since these will be exposed to the most radiation. There’s ortho-fabric, something we have a lot of experience using on the outside of spacesuits. That’s three materials in one: It includes Nomex, a flame-resistant material found in firefighter outfits; Gore-Tex, which is waterproof but breathable; and Kevlar, which has been used in bulletproof vests.

We are also testing a sample of Vectran on its own, which we currently use for the palms of spacesuit gloves. It’s cut-resistant, which is useful on the International Space Station: Micrometeoroids strike handrails outside the station, creating pits with sharp edges that can cut gloves.


Finally, there’s a piece of polycarbonate, which we use for helmet bubbles and visors because it helps reduce ultraviolet light. A nice thing about it is it doesn’t shatter. If impacted, it bends rather than breaks and still has good optical properties.

How will SHERLOC check the samples?

Ross: On Mars, radiation will break down the chemical composition of the materials, weakening their tensile strength. We want to figure out how long these materials will last. Do we need to develop new materials, or will these hang in there?

SHERLOC can get the spectra, or composition, of rocks the mission’s scientists want to study. It can do the same thing for these spacesuit materials. We’ve already tested them on Earth, bathing samples in radiation and then analyzing their spectra. The results of those tests, conducted in ultraviolet vacuum chambers at NASA’s Marshall Space Flight Center, will be compared to what we see on Mars.

Will Martian dust be a challenge?

Ross: Sure, it’s an engineering challenge, but there’s no reason we can’t design things to operate in dust. We’re already developing things like seals that keep dust out of our bearings. Spacesuits have bearings at the shoulders, wrists, hip, upper thighs, and ankles. They all give an astronaut mobility for walking, kneeling, and other movements you’d need to get up close to rocks or maintain a habitat.

Remember, our suits inflate to over 4 pounds per square inch of pressure. That’s not a crazy amount of pressure, but it’s pretty stiff. When you put a human inside a balloon and ask them to move, they’ll have trouble. It’s as tight as the head of a drum. So we need to seal off the bearings so dust doesn’t gunk them up.

We are looking for other ways to protect the suit from Martian dust over a long-duration mission. We know that a coated or film material will be better than a woven material that has space between the woven yarns. The two Teflon samples let us look at that as well as the performance of the dust-resistant coating.


How much would spacesuit design differ between the space station, the Moon, and Mars?

Ross: Spacesuit design depends on where you’re going and what you’re doing. The ISS suit is designed specifically for microgravity. If you go on a spacewalk, you’re not really walking; you use your hands everywhere. Your lower torso is just used as a stable platform for your upper body. The suit is also exposed to two environmental sources of degradation: solar radiation and atomic oxygen [12]. Atomic oxygen is different from the oxygen we breathe. It’s very reactive and can degrade spacesuit materials.

The Moon doesn’t have the atomic oxygen problem but is worse than Mars in terms of radiation. You’re pretty close to the Sun and have no atmosphere to scatter the ultraviolet radiation like you do on Mars. The Moon is a big testbed for the Artemis program [1]. The environments of the Moon and Mars aren’t exactly the same, but the durability challenges – materials exposed over long periods of time at low pressures in a dusty environment – are similar.

On Mars, you’re farther from the Sun, and you have at least a little atmosphere to scatter the UV. But that’s when the duration of exposure starts to get you. You have to plan on being exposed on the surface most of the time. Mars spacesuits will be more like ones we use for the Moon and less like those for the ISS. I’m trying to make the Moon suit as much like the Mars suit as possible.

About the Perseverance Mars Rover Mission

Perseverance is a robotic scientist that weighs just under 2,300 pounds (1,043 kilograms). The rover’s astrobiology [13] mission will search for signs of past microbial life. It will characterize the planet’s climate and geology, collect samples for future return to Earth, and pave the way for human exploration of the Red Planet. No matter what day Perseverance launches during its July 30th-August 15th launch window, it will land at Mars’ Jezero Crater on February 18th, 2021.

A division of Caltech, NASA’s Jet Propulsion Laboratory manages the Mars 2020 Perseverance rover mission for the agency’s Science Mission Directorate. The mission is part of a larger program that includes missions to the Moon as a way to prepare for human exploration of the Red Planet. Charged with returning astronauts to the Moon by 2024, NASA will establish a sustained human presence on and around the Moon by 2028 through NASA’s Artemis lunar exploration plans [1].

[1] first woman and next man to the Moon: https://www.nasa.gov/specials/artemis/

[6] a fragment of a Martian meteorite: https://mars.nasa.gov/news/8308/a-piece-of-mars-is-going-home/