Clarksville, TN – At the dawn of 2019, Austin Peay State University (APSU) football’s Josephus Smith had two appearances as a Gov, John Wesley Whiteside was coming off a redshirt season, Matthew Gayle had three tackles for loss across two seasons as a Gov and Kwame Sutton was still looking for his first career sack.

What a difference a year makes.

Smith returns as an All-American candidate after a breakout junior campaign that saw him challenge for the program’s single-season tackles for loss record.

Whiteside is back after an All-OVC Newcomer season to form one of the best interior line tandems in college football—any level.

I said it. Gayle doubled that career tackles for loss number in just one season, adding six a year ago, and is poised to be a difference-maker once again on the edge alongside Sutton, who tallied four sacks and 41 tackles as a sophomore.

And that’s not even mentioning what’s in store among newcomers and the returners primed for a breakout season. The APSU Govs are truly two-deep at every position along the defensive front, a unit that was among the nation’s top-10 in run defense a year ago and figures to vex opponents just as much in 2020.

It also will do so with a new leader in the meeting room. With Marquase Lovings assuming command of the entire Austin Peay State University football operation, his trusted deputy from last season takes the reins as defensive line coach. Fiery and passionate, Kevon Beckwith has both the cache and the experience befitting what defensive coordinator Mark Powell called, “the most overqualified assistant defensive line coach in the country last season.”

“They’re ready to play,” Beckwith said of his unit. “We know our potential, we know what we can do and we’re just striving, each and every day. Work the fundamentals, take them to the team period and then take it to the game.”

Beckwith’s first year at the helm offers him a bounty of talent to work with. In addition to the four returners who made such a difference last year, the APSU Govs have a trio of FBS transfers to push the returners. After a year residency, Duke transfer Terrell Lucas should feature into the pass rush this year, joining Jequaries Martin, the Middle Tennessee transfer who saw action in nine games and recorded 10 tackles a year ago.


But the big one is Damion Barber, a Penn State transfer who was a four-star prospect in 2017 and made 11 tackles across two seasons as a Nittany Lion. That much FBS talent on one roster at the FCS level is impressive; to have it all in the defensive line room spells trouble for the rest of the league.

“We understand we have a bunch of talent but the depth chart is fluid,” Beckwith said. “The guy who does things the right way, on and off the field, is going to get the nod. Talent is just potential, we still have to lock in on the fundamentals and the details of the game.”

A pair of returning sophomores saw plenty of action a year ago and figure heavily into the rotational plans this year. Darryl Rogan and Jau’von Young both provided depth and flashes of promise a year ago and will be even better with a year in the system. And don’t forget Mason Harwell—before injury interrupted his season last year, he was a Week One starter and still earned 22 tackles across 10 games. 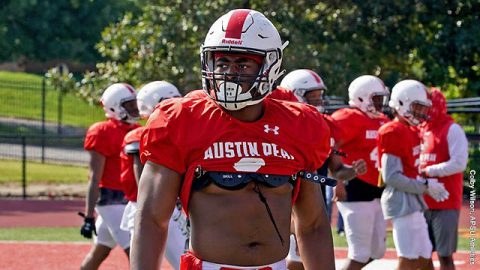 Like we said up top—an embarrassment of riches. Austin Peay State University’s twos and threes could start a lot of places, across the league and college football at large.

To this group, add a bevy of talented freshmen, true and redshirt, for 2020. Caden McKinnis and Dean Powell redshirted last season, and Elijah Rawlins is eager for his first action as a redshirt sophomore.

And add to that group true freshmen Terrell Allen, Hosea Knifeley Jr., Tyqaze Leggs, Kenneth Martin and Demetri Scott and as a unit, how could you not consider this group every bit as formidable as last season’s?

But last year was last year. And Beckwith is not content to let last year speak for itself.

“Last year, this unit dominated the OVC,” Beckwith said. “We were the No. 8 rushing defense in the country. But last year, that was the culmination of hard work, of attention to detail. Coach Lovings did a fantastic job of getting those guys to do the work, and now we’ve got to capitalize on that. We know what that feels like, what it looks like. We’ve just got to work every day.”

Powell’s Perspective
“The guys up front, the best part about them is their versatility. You might see Josephus Smith in 4-I and then slide in to play nose. Doc Rogan and Jau’von Young showed up last year as true freshmen and wound up playing significant snaps for us in the playoffs. When you’re a true freshman playing in the FCS quarterfinals, those snaps are just unbelievable to get. Matt Gayle is an unbelievable guy, an unbelievable leader.”

“And some of these young guys have really impressed me early on. Terrell Allen is having a good camp. Ty Leggs is having a good camp. Knifeley, Scott… all those guys are doing a really good job so far. Coach Beck does a hell of a job with that group, and I’m happy we were able to bring Coach Stoos (Mark Aanstoos) back. Those guys up front are so interchangeable and so smart, and they’re able to play as a unit. We’re going to be as good as the box is, and it starts with them up front.”

Throughout fall camp, LetsGoPeay.com will take a look at each of the position groups as the Austin Peay State University football team goes through preparations for the 2020 season. We lead off with the group that closed the 2019 previews—the defensive line. But where we had as many questions as answers at that spot heading into last season, it’s undoubtedly a position of strength with 2020 on the horizon.