Pasadena, CA – Since leaving Earth 15 years ago, NASA’s Mars Reconnaissance Orbiter has reshaped our understanding of the Red Planet. The veteran spacecraft studies temperatures in Mars’ thin atmosphere, peers underground with radar, and detects minerals on the planet’s surface. But perhaps what it’s become best known for are stunning images. 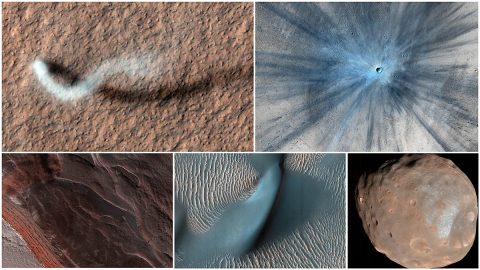 Five images taken by the HiRISE camera aboard NASA’s Mars Reconnaissance Orbiter, which launched 15 years ago, on Aug. 12, 2005. Along with being a rich source of images for research, MRO studies atmospheric temperatures, peers underground with radar, and detects minerals on the planet’s surface. (NASA/JPL-Caltech/University of Arizona)

Those images, in turn, offer context for the tightly focused images provided by MRO’s third camera, the High-Resolution Imaging Science Experiment (HiRISE), which produces the most striking views.

Able to zoom in on surface features at the highest resolution, the detailed, color images from HiRISE have captured dramatic scenes of nature: tumbling avalanches, skyscraping dust devils, and other features of a changing landscape.

The camera has also provided images of other NASA spacecraft at Mars, like the Curiosity and Opportunity rovers. MRO has even flipped itself around to point HiRISE out at Earth and Phobos, one of Mars’ two moons.

As of early August, HiRISE alone had taken 6,882,204 images, generating 194 terabytes of data sent from Mars since 2006. The following images are just a glimpse of the amazing work performed by all three cameras aboard MRO, which is managed by NASA’s Jet Propulsion Laboratory in Southern California. 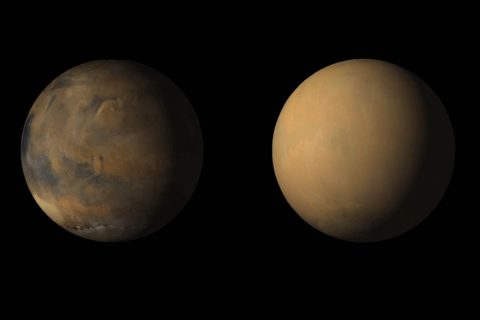 Dust storms are routine on Mars. Most are limited to small regions and are not as dramatic as what’s portrayed in movies [1]. But once or twice a decade, a series of regional storms will create a domino effect, lifting enough dust for winds to cover the surface in what’s called a “planet-encircling dust event.”

This one, captured by MARCI in the summer of 2018, darkened the region above the Opportunity rover, depriving its solar panels of sunlight and ultimately leading to the end of the mission. 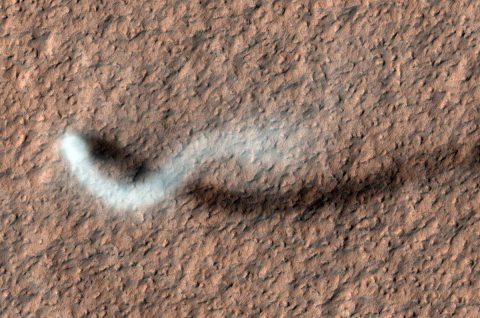 A towering dust devil casts a serpentine shadow over the Martian surface in this image acquired by the High Resolution Imaging Science Experiment (HiRISE) camera on NASA’s Mars Reconnaissance Orbiter. (NASA/JPL-Caltech/Univ. of Arizona)

As HiRISE pans over large swaths of Mars’ surface, it occasionally discovers surprises like this towering dust devil, which was captured from 185 miles (297 kilometers) above the ground. The length of this whirlwind’s shadow indicates that it was more than half a mile (800 meters) high – about the size of the United Arab Emirate’s Burj Khalifa, the tallest building on Earth. 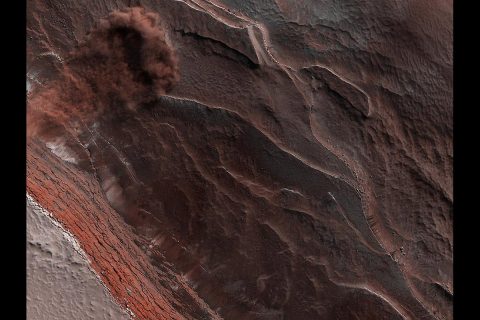 The High-Resolution Imaging Science Experiment (Hi-RISE) camera aboard NASA’s Mars Reconnaissance Orbiter captured this avalanche plunging down a 1,640-foot-tall (500-meter-tall) cliff on May 29, 2019. The image also reveals layers at Mars’ north pole during spring. As temperatures increase and vaporize ice, the destabilized ice blocks break loose and kick up dust. (NASA/JPL-Caltech/University of Arizona)

HiRISE has captured avalanches in action. As seasonal ice vaporized in the spring, these 1,640-foot-tall (500-meter-tall) cliffs at Mars’ north pole began to crumble. Such cliffs reveal the deep time scales on the planet, exposing the many layers of ice and dust that have settled during different eras. Like the rings of a tree, each layer has a story to tell scientists about how the environment was changing.


That’s Going to Leave a Dent 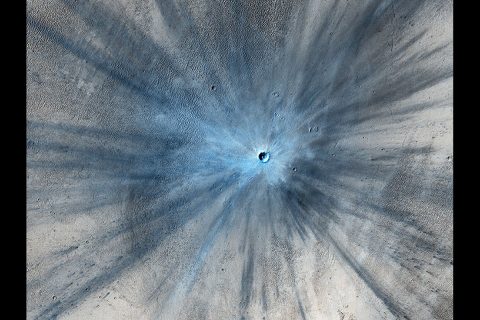 A dramatic, fresh impact crater dominates this image taken by the High Resolution Imaging Science Experiment (HiRISE) camera on NASA’s Mars Reconnaissance Orbiter on Nov. 19, 2013. Researchers used HiRISE to examine this site because the orbiter’s Context Camera had revealed a change in appearance here between observations in July 2010 and May 2012, bracketing the formation of the crater between those observations. (NASA/JPL-Caltech/Univ. of Arizona)

Mars has a thin atmosphere – just 1% as dense as Earth’s. As a result, there’s less of a protective barrier to burn up space debris. That means larger meteors make it through the Red Planet’s atmosphere than Earth’s. CTX has detected over 800 new impact craters during MRO’s mission. After CTX spotted this one, scientists took a more detailed image with HiRISE.

The crater spans approximately 100 feet (30 meters) in diameter and is surrounded by a large, rayed blast zone. In examining the distribution of ejecta – the debris tossed outward during the formation of a crater – scientists can learn more about the impact event. The explosion that created this crater threw ejecta as far as 9.3 miles (15 kilometers).

The Face of Time 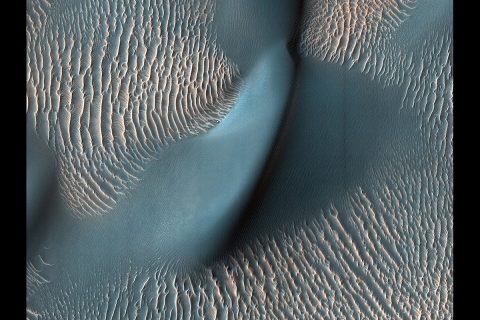 The High Resolution Imaging Science Experiment (HiRISE) camera aboard NASA’s Mars Reconnaissance Orbiter captured these sand ripples and the large dune (at center) on Feb. 9, 2009. Color has been added to make textures easier to see. This area is in Proctor Crater at 47.8 degrees south latitude and 30.7 degrees east longitude. (NASA/JPL-Caltech/University of Arizona)

Land changes over time, so having a spacecraft at Mars for years offers a unique perspective. “The more we look, the more we discover,” said Leslie Tamppari, MRO’s deputy project scientist at JPL. “Before MRO, it wasn’t clear what on Mars really changed, if anything. We thought the atmosphere was so thin that there was almost no sand motion and most dune movement happened in the ancient past.”

We now know that’s not the case. “False color” has been added to this image to accentuate certain details, like the tops of dunes and ripples. Many of these landforms are migrating, as they do on Earth: Sand grain by sand grain, they’re carried by wind, crawling across the planet over millions of years. 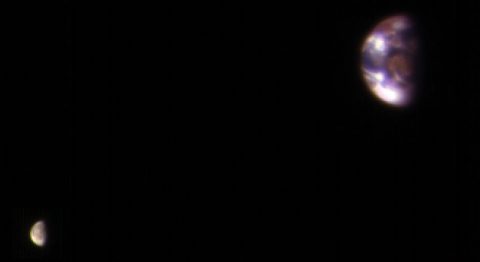 This composite image of Earth and its moon, as seen from Mars, combines the best Earth image with the best moon image from four sets of images acquired on Nov. 20, 2016, by the High Resolution Imaging Science Experiment (HiRISE) camera on NASA’s Mars Reconnaissance Orbiter. (NASA/JPL-Caltech/Univ. of Arizona)

MRO hasn’t only looked at Mars. This composite, made from four sets of HiRISE images of Earth and our Moon, was actually the second time [5] that HiRISE had captured our home planet. 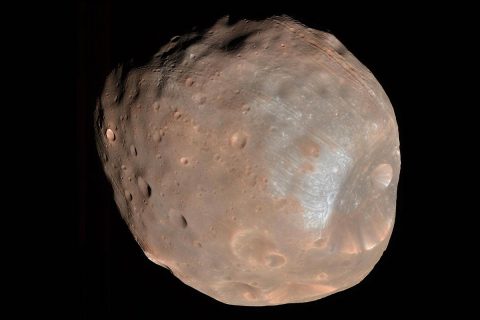 The High Resolution Imaging Science Experiment (HiRISE) camera on NASA’s Mars Reconnaissance Orbiter took two images of the larger of Mars’ two moons, Phobos, within 10 minutes of each other on March 23rd, 2008. This is the first, taken from a distance of about 6,800 kilometers (about 4,200 miles). It is presented in color by combining data from the camera’s blue-green, red, and near-infrared channels. (NASA/JPL-Caltech/University of Arizona)

Named for the Greek god of fear, Phobos is one of Mars’ two moons (Deimos, named for the god of terror, is the other), and it’s only about 13 miles (21 kilometers) across. Stickney Crater, the indentation on the moon’s lower right, is about 5.6 miles (9 kilometers) wide in this HiRISE image.

Despite its small size, Phobos is of great interest to scientists: Is it a captured asteroid, or a chunk of Mars that broke off after a massive impact? A Japanese mission is scheduled to launch to Phobos in the near future, and the moon has been proposed as a staging ground for astronauts before they go to Mars. 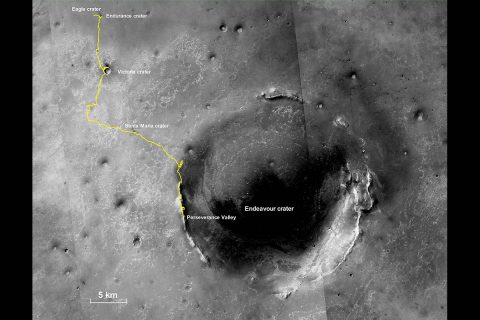 This final traverse map for NASA’s Opportunity rover shows where the rover was located within Perseverance Valley on June 10th, 2018, the last date it made contact with its engineering team. (NASA/JPL-Caltech/MSSS)

Based on an image from CTX, this map shows the complete traverse of the Opportunity rover after exploring the planet for more than 15 years. Both HiRISE and CTX are used by scientists to make maps of landing sites for future human and robotic missions as well as to chart the progress of rovers on the ground. 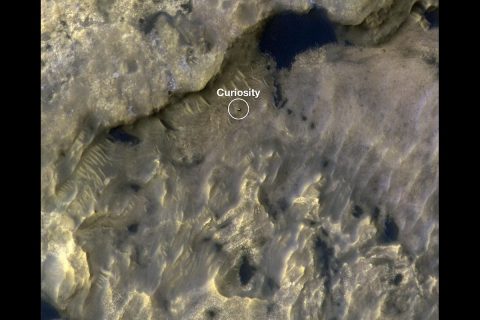 This image shows the position of NASA’s Curiosity rover as it journeyed 1,106 feet (337 meters) through an area of Mount Sharp called “the clay-bearing unit” between May 31 and July 20, 2019. Each of these two images were taken by the HiRISE camera on NASA’s Mars Reconnaissance Orbiter. (NASA/JPL-Caltech/University of Arizona)

HiRISE has frequently been used to snap images of NASA spacecraft on the Martian surface, capturing Spirit, Opportunity, and Curiosity as well as the stationary landers Phoenix and InSight. NASA’s newest rover, Perseverance, is currently on its way to Jezero Crater [7]. After it arrives on February 18th, 2021, you can bet there will be some images of it as well.


The Eyes Have It 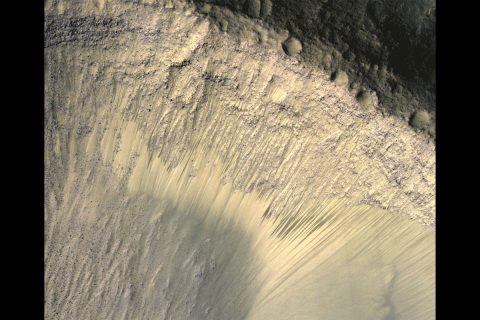 This image from the High Resolution Imaging Science Experiment (HiRISE) camera on NASA’s Mars Reconnaissance Orbiter show how the appearance of dark markings on Martian slope changes with the seasons. The marks, called recurrent slope linea, extend down slopes during warmer months and fade away during cooler months. (NASA/JPL-Caltech/Univ. of Arizona)

It takes sharp eyes to find unique features on Mars, like recurring slope lineae. These dark streaks appear in the same places at around the same times of year. It was initially proposed they were caused by brine, since salt could allow water to remain liquid in the thin Martian atmosphere. The consensus now, however, is that they’re actually caused by dark sand sliding down inclines.

The streaks were discovered by Lujendra Ojha, who was an undergraduate at the University of Arizona, which operates the HiRISE camera, and now is a professor at Rutgers University. “Sometimes you’re just looking at the right place at the right time,” Ojha said. “I was completely baffled when I first spotted this, because I was just a student at the time – I wasn’t even in a planetary program.” Undergraduates work alongside experienced scientists to spot unique features like these in HiRISE images.


Want to see more? Scientists and the public can request specific kinds of MRO images [10].

For more information about MRO:

JPL, a division of Caltech in Pasadena, California, manages the MRO mission for NASA’s Science Mission Directorate in Washington. The University of Arizona, in Tucson, operates HiRISE, which was built by Ball Aerospace & Technologies Corp., in Boulder, Colorado. MARCI and the Context Camera were both built and are operated by Malin Space Science Systems in San Diego.

[1] not as dramatic as what’s portrayed in movies: https://www.nasa.gov/feature/goddard/the-fact-and-fiction-of-martian-dust-storms/

[7] on its way to Jezero Crater: https://mars.nasa.gov/mars2020/timeline/cruise/