Washington, D.C. – Speaking at FEMA headquarters in Washington Thursday, August 27th, 2020, President Donald Trump announced that he will travel to Texas and Louisiana this weekend to survey storm damage resulting from Hurricane Laura.

The hurricane made landfall around 1:00am CT in Louisiana Thursday morning before being downgraded to a tropical storm early that afternoon. 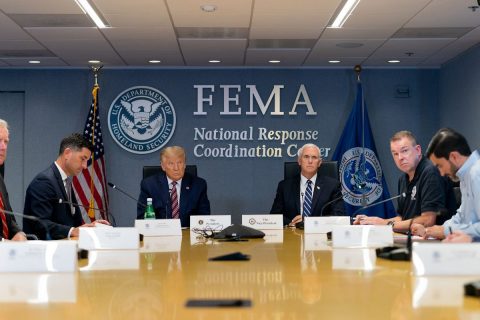 “All Americans are thinking of the great people of Texas, Louisiana, Arkansas, and Mississippi—and all of those incredible states that are affected,” President Trump said.

President Trump and his Administration are closely monitoring the situation on the ground, and he has mobilized the Federal Government to support response efforts. The Administration began putting precautionary measures in place last week, in close coordination with state and local officials.

As a result, over 3.5 million meals and 1.7 million liters of water were prepositioned in Louisiana and Texas alone.

“We actually overstocked this year, because we knew it was going to be a higher than average hurricane season, so we’re in good shape,” FEMA Administrator Pete Gaynor said. “We have plenty of funding from the Disaster Relief Fund and so, no one should worry about that in Texas, Louisiana, or Arkansas this morning.”

The President encourages all Americans in the storm’s path to continue to heed the advice of local and state officials regarding evacuation orders and safety precautions.

“I just want to thank all of the people from FEMA in particular—and all law enforcement and everyone else locally, because they’ve done fantastic job,” President Trump said.