Edwards, CA – Astronaut  Doug “Wheels” Wheelock spent his NASA career expanding knowledge of living and working in space. His new mission is working to determine the best way to train astronauts to return to the surface of the Moon.

Wheelock [1] is a veteran test pilot and retired U.S. Army colonel who has accumulated 178 days in space and was a guest speaker at NASA’s Armstrong Flight Research Center in California during a recent virtual Safety Day. 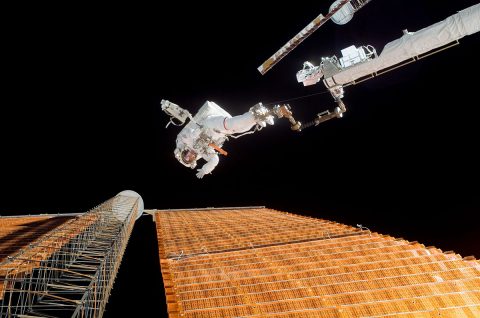 Astronaut Scott Parazynski, while anchored to a foot restraint, assessed his repair work as the solar array was fully deployed while Space Suttle Discovery was docked with the International Space Station. Astronaut Doug Wheelock (out of frame) assisted from the truss by keeping an eye on the distance between Parazynski and the array. (Doug “Wheels” Wheelock)

During his NASA career he conducted six spacewalks, flew in Space Shuttle Discovery and the Russian Soyuz and served as International Space Station Expedition 25 commander.

He was recently selected by the NASA Flight Operations directorate at NASA’s Johnson Space Center in Houston to lead the human lander system joint testing.

He also is co-chairman of the joint test panel for the lunar landing project that is part of NASA’s Artemis mission to return astronauts for sustainable human exploration of the Moon.

A broad agency announcement to define, develop and bid on lunar lander platform was the basis of an award April 30th to three companies to design and build human landing systems. The three companies include Blue Origin of Kent, Washington, Dynetics of Huntsville, Alabama, and Space-X of Hawthorne, California.

NASA’s Johnson Space Center in Houston asked Wheelock to lead the joint test team, which is essentially looking at training crews to land on the Moon.

“We have these companies that are building landers, but we need to be able to train our crews,” Wheelock said. “ I am managing the test development and eventual testing and selection of platforms we will use for fixed base mockups, motion simulation and inflight trainers.”

It wasn’t always space missions and lunar landers for Wheelock. From an early age he said he learned from Neil Armstrong, as he watched as the first man on the Moon showcase qualities he believed leaders should have, such as humility and authenticity.


“I had a chance to ask him a question (when I was a kid), and I wanted to know how he felt as an extraordinary superhero,” he said. Armstrong did not view himself in that way, which had an even bigger influence on Wheelock.

“How does an ordinary boy end up standing on the Moon?” he thought. “I later learned that ordinary kids from ordinary places do intersect with the extraordinary.

It wasn’t until years later after he had been an astronaut that he recalled what a first grade teacher told him, “You could land on the Moon one day, too.” As an astronaut, he remembered that and knows, “Children of all ages look to NASA for redefining what’s possible for them.” 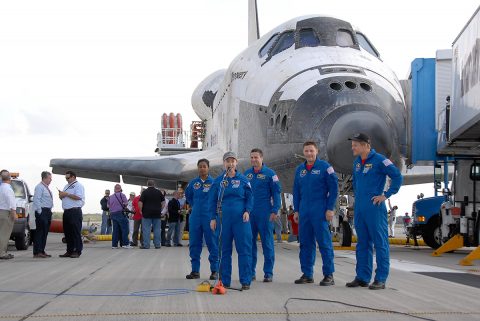 STS-120 Commander Pamela Melroy talked to media and guests on the Shuttle Landing Facility at NASA’s Kennedy Space Center after landing Space Shuttle Discovery. Behind her from left are mission specialist Stephanie Wilson, pilot George Zamka and mission specialists Doug Wheelock and Scott Parazynski. Mission STS-120 continued the construction of the station with the installation of the Harmony Node 2 module and the relocation of the P6 truss. (Kim Shiflett)

On August 24th, 1998, he was selected as an astronaut and learned how to tackle complex challenges.

“It’s like when we have pieces to a 1,000 piece puzzle and all pieces in front of us, but the box was taken away,” he said. “We don’t know what it looks like, but we look for the corners. Corners are the existence of our hearts, minds, bodies and souls.”

The approach applies to a number of challenges.


“What we do in the simulators, or flying test plans, we know what the picture is supposed to look like,” Wheelock said. “However, we may be doing something we have never done before, or trying to gain knowledge on a piece of equipment for the first time and that also is a puzzle. If we don’t approach it by looking for the corners and connective parts, then we’re not going to solve it.”

Wheelock said being an astronaut isn’t easy and he had to overcome several fears if he was to conquer the skies and space. He had an intense fear of falling and loud noises. Through strength, courage and a commitment to teamwork, he overcame it all and was rewarded for his hard work.

“When I went to space I wanted to rush to the window,” he recalled. I wanted to look at the thin blue line of the atmosphere and see from space the small town I came from.”