“By focusing on job creation and economic growth, the two countries were able to reach a major breakthrough—something that nobody thought was going to be possible,” President Trump said. 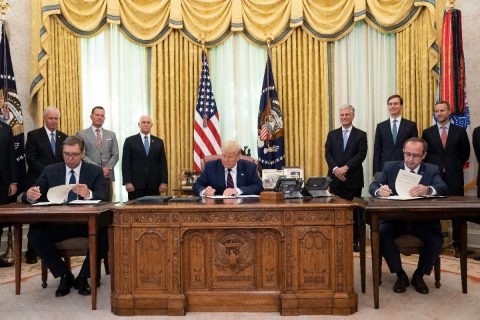 President Trump’s Administration has delivered recently on a number of major peacemaking deals. The agreement between Kosovo and Serbia follows just weeks after another huge breakthrough brokered between Israel and the United Arab Emirates.

A key side benefit of the Serbia-Kosovo deal, National Security Advisor Robert O’Brien said on Friday, is that it now allows for “the establishment of diplomatic relations between Kosovo, a majority-Muslim state, and the State of Israel.”

In the Oval Office, President Vučić and Prime Minister Hoti thanked President Trump and his team for their commitment to peace and stability in the region.

“I look forward to seeing Serbia and Kosovo prosper as we work together on economic cooperation in the region. Going forward—I look forward to going to both countries someday in the not-too-distant future,” President Trump said.