Washington, D.C. – President Donald Trump visited Florida yesterday, where he signed a presidential order to extend the moratorium on offshore drilling for Florida’s Gulf Coast. He also expanded the moratorium to include the Atlantic coasts of Florida, Georgia, and South Carolina.

“Thanks to my administration’s pro-American energy policies, we can take this step and the next step while remaining the number-one producer of oil and natural gas anywhere in the world,” the President said in Jupiter, Florida. 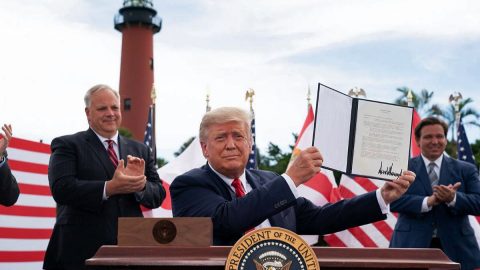 President Donald Trump: We can protect our environment AND create jobs! [1]

“With fracking, the shale revolution, and the tremendous surge in American energy production, we’re showing that we can create jobs, safeguard the environment, and keep energy prices low for America and low for our citizens.”

While America has become the world’s top producer of oil and natural gas, our country has also successfully cut greenhouse gas emissions and improved air quality.

“The left’s agenda isn’t about protecting the environment—it’s about punishing America,” President Trump said. “Instead of focusing on radical ideology, my administration is focused on delivering real results.”

Here are just a few of those results when it comes to the environment:


“We’ll preserve this glorious land for our children, for our grandchildren, and for every generation of American to come,” President Trump said.