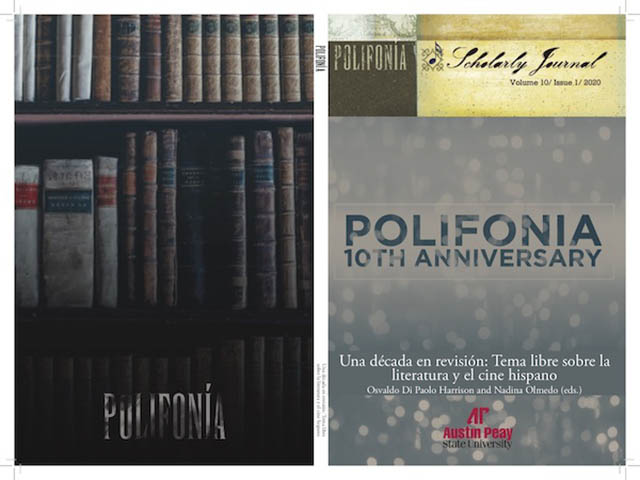 Clarksville, TN – This year marks the 10th anniversary of the Austin Peay State University (APSU) bilingual (Spanish and English), scholarly, peer-reviewed journal, Polifonía Journal. The journal, first launched in 2011, is dedicated to scholarly essays about literature and film in the Hispanic world and offers something different for its writers each year. 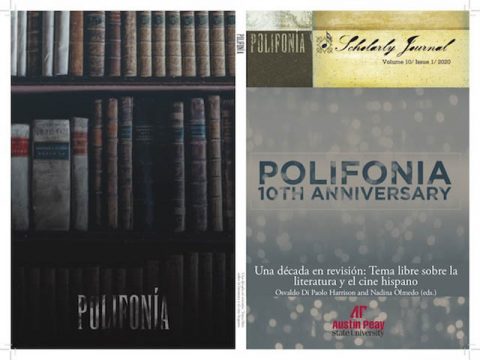 Dr. Nadina Olmedo, associate professor of Spanish at the University of San Francisco, and Dr. Osvaldo Di Paolo Harrison, APSU professor of Spanish, had the idea to start the journal when they found it hard to find a space to share their research on genres that are traditionally underestimated by literary criticism and academia, Olmedo said.

“We believed that we needed more opportunities and visibility to research regarding popular genres (Gothic, Detective Fiction, Science Fiction, etc.),” Di Paolo Harrison said. “Moreover, we needed a space that provided the analysis of texts in a less conservative way, less canonical and more insightful about those genres in the 21st Century, considering their hybridity and the social importance that they currently have.”

Past journals have included themes of Cultural productions of the new millennium, Masculinities, Hispanic Caribbean, Melodrama in Hispanic literature and cinema and other essays, and many more. These topics have allowed doctoral students and scholars around the world to make their cultural and literary research more visible.

In addition, Olmedo points to “the importance of the journal from a diversity standpoint. As we face many racial and discriminatory issues, universities are finding ways to be more inclusive.”

“Polifonía is an important diversity tool, and its existence contributes to promote diversity at APSU and everywhere else,” Di Paolo Harrison said.

The editorial board – consisting of a wide range of international scholars from Budapest to Argentina, from Spain to the Netherlands – decided to celebrate the journal’s 10th anniversary by calling for a free topic on Hispanic literature. The journal will be available this November, and special edition display of the journal will be on display later at Austin Peay State University’s Woodward Library. That display will feature Polifonía covers from the last 10 years, as well as copies of the journals.

“When I am designing the cover, I try to convey the theme of the book through the imagery,” Danielle Hunter, APSU alumnae and cover designer, said. “Since the volumes are bilingual, I want anyone to be able to look at the cover and tell what it’s about. I like to take a very simple approach to my choices because I don’t think it needs a cover that is busy or loud. It just needs to summarize what’s inside, without directly telling you what it’s about.”


The journal is also available digitally, thanks to Dr. John Nicholson, APSU professor of Computer Science and Information Technology. Di Paolo Harrison and Nicholson collaborate to format the articles, so they look consistent. They create the files for the printer and then upload the electronic copies. The electronic format breaks frontiers and reaches out to the whole world.

To read past editions of APSU’s Polifonía Journal, click here.

Facebook
Twitter
Pinterest
Email
Print
Previous articleMarsha Blackburn: How Can Comey, Rosenstein and Yates Have Been So Oblivious?
Next articlePresident Donald Trump takes action to protect American Mining from China