This is the first occasion since Nissan Stadium opened in 1999 in which two undefeated teams after three or more weeks of a season will take the field. Kickoff is scheduled for noon CT on Sunday, October 11th, 2020. 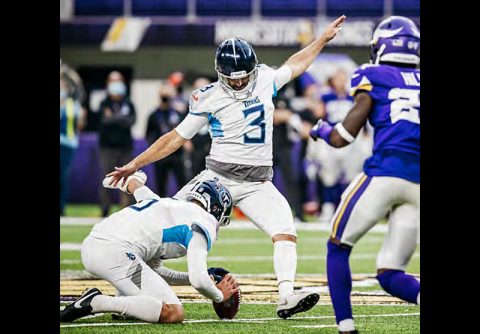 Last week’s scheduled contest between the Tennessee Titans and Pittsburgh Steelers was postponed due to Titans players and staff members testing positive for COVID-19 Coronavirus.

The game will be made up on Sunday, October 25th, the original date of the Titans’ bye.

The matchup with the Steelers was supposed to be the first game of 2020 that the Titans welcomed fans back to Nissan Stadium. Instead it shifts to this week, with ticket sales to season ticket members being capped at 12.5 percent of the venue’s normal capacity.

The number of fans will gradually increase over the course of the Titans’ coming games with the potential to accommodate 21 percent of the venue’s normal capacity under current U.S. Center for Disease Control and Prevention (CDC) guidelines. Detailed information on the team’s Safe Stadium Plan can be found at www.tennesseetitans.com/safestadium [1]

Additionally, Sports USA will broadcast the game to a national radio audience. Play-by-play announcer Larry Kahn and analyst Mark Carrier will have the call.

When the Titans last took the field on September 27th at the Minnesota Vikings, Stephen Gostkowski’s 55-yard game-winning field goal lifted them to a 31-30 victory.


Offensive lineman Isaiah Wilson and cornerback Greg Mabin (practice squad) were already on the list prior to the Minnesota trip.

By Tuesday, September 29th, the Titans had suspended in-person activities and closed the team’s training facility, Saint Thomas Sports Park. Then, on Thursday, October 1st, the NFL announced that the Titans-Steelers game would be moved to Sunday, October 25th.

When the Titans return to Saint Thomas Sports Park this week, enhanced protocols will be in place. Some of those measures include the following: daily rapid point of care testing before entering the building; no in-person meetings (virtual only); personal protective equipment or masks required on the practice field; a weight room limit of 10 players at a time; and daily deep cleaning of the facility.

The Buffalo Bills kept their record perfect after traveling to Las Vegas and defeating the Raiders 30-23. Their earlier wins came, in order, against the New York Jets, at the Miami Dolphins and against the Los Angeles Rams.

Third-year quarterback Josh Allen passed for 288 yards and two touchdowns and added a rushing touchdown in the win at Las Vegas. For the season, he ranks second in the NFL in passing yards (1,326), passing touchdowns (12) and passer rating (122.7), and he has three total rushing touchdowns.

Sean McDermott is in his fourth season as Buffalo’s head coach. The former Carolina Panthers defensive coordinator led the Bills to the playoffs in two of his first three seasons, including a 10-6 record and a wild card playoff berth in 2019.

This week, the Titans are supporting Mother to Mother by asking fans to purchase and donate essential baby items for low-income families. Mother to Mother is a Nashville-based nonprofit that provides vital health, safety and wellness items for infants and children in need by working with a network of social workers, nurses, social service agencies and hospitals across Tennessee. To date, the organization has served more than 140,000 children.