Nashville, TN – In Week 17 of the 2019 season, the Tennessee Titans traveled to Houston and secured a playoff berth with a 35-14 victory over the Houston Texans. 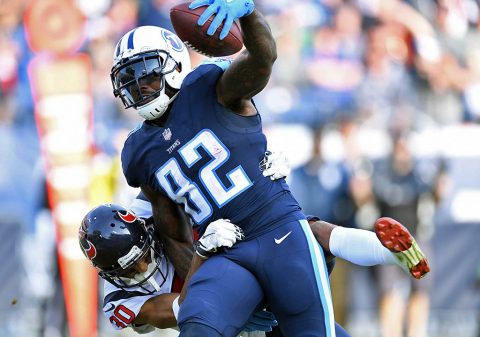 Ultimately, Johnson ran into the end zone on a one-yard score for an early 7-0 lead. As the Tennessee offense took the field, Titans QB Ryan Tannehill and the offense responded and engineered a quick four-play scoring drive.

Tannehill opened the drive with a 19-yard rush before connecting with WR A.J. Brown for a 51-yard touchdown down the right sideline to tie the game, 7-7.

QB Marcus Mariota entered the game to throw a 24-yard pass to Brown, which not only moved the chains, but also put Brown over 1,000 receiving yards on the season. Ultimately, Tannehill found TE MyCole Pruitt in the end zone for a one-yard touchdown and a 14-7 lead.

Tennessee began the second half in possession of the ball and orchestrated a 78-yard scoring drive that featured 10 straight run plays. Henry accounted for 46 yards on the drive, including a three-yard touchdown plunge to make it a 21-7 game. On the following Houston possession, the Texans responded with a scoring drive to pull within one possession.

The 16-play scoring drive culminated in a one-yard rushing score by McCarron, 21-14. Then on the ensuing Titans possession, Brown made another big play as he caught a 47-yard reception that gave Tennessee the ball at the Houston one-yard line. Henry swiftly ran in a one-yard touchdown to make it a 28-14 game.

In the fourth quarter with 3:30 remaining to play, McCarron attempted a pass but it was intercepted by S Kevin Byard at the Tennessee 15-yard line. The offense took the field and Henry recorded three consecutive carries of five, 23, and four yards, before breaking free for a 53-yard rushing score that secured the victory as well as the NFL’s rushing title.

Tennessee secured a playoff berth after winning a 35-14 division game on the road.