Clarksville, TN – The first three games of the 2020-21 Austin Peay State University (APSU) men’s basketball schedule have been released, with the Govs slated to compete in bdG Sports’ #BeachBubble at the Gulf Coast Showcase, November 25th-27th, 2020 in Fort Myers, Florida. 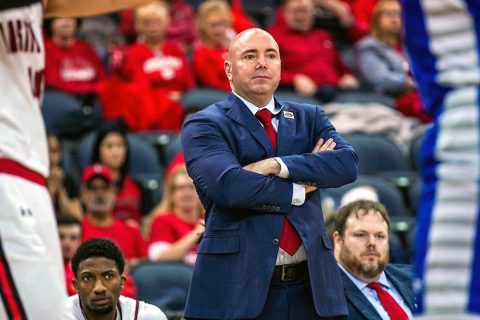 The Govs are guaranteed three games, beginning November 25th (4:00pm CT) against Nebraska-Omaha; the victor will take on the winner between Indiana State and East Carolina, November 26th (7:00pm CT), while the losers of those two contests will square off in the 1:00pm contest that day.

The final day features the seventh-place (10:00am), fifth-place (1:00pm), third-place (4:00pm) and championship (7:00pm) contests, with every game at the event scheduled to take place at Hertz Arena. All 12 games will be streamed live and available on-demand on FloHoops.com.

Derrin Hansen, in his 16th season as head coach, returns 2020 Summit League Defensive Player of the Year Matt Pile and Summit League Sixth Man of the Year Marlon Ruffin from last season’s squad; both were preseason all-league picks for the Mavericks heading into 2020-21.

Win or lose, the Govs are guaranteed to then see either Indiana State out of the Missouri Valley Conference or East Carolina from the American. Indiana State went 18-12 in 2019-20, falling to Missouri State in the Arch Madness Quarterfinals. The Sycamores return leading scorer Tyreke Key and All-Freshman teamer Jake LaRavia, and were picked fourth in the Missouri Valley’s preseason poll.

East Carolina went 11-20 a year ago in a competitive American Athletic Conference. Head coach Joe Dooley, who coached Florida Gulf Coast to NCAA Tournament appearances in 2016 and 2017, makes a return to Fort Myers with a senior-heavy team to supplement junior forward Jayden Gardner who led the American in scoring at 19.7 ppg in 2019-20.


There will be no general fan access for the Gulf Coast Showcase games and tickets will not be available to the general public. A limited number of “Spectator Credentials” will be supplied to each team. A requirement to receiving these team-issued credentials, all individuals will receive a COVID-19 Coronavirus rapid antigen test at the event’s medical center at Hyatt Regency Coconut Point.