Knoxville, TN – After an unexpected open week, the Tennessee football team will be back in action this Saturday night with a primetime showdown On the Plains against No. 23/21 Auburn.

The Vols will look to earn their second win at Auburn in the past three seasons after upsetting the 21st ranked Tigers at Jordan-Hare Stadium back in 2018, giving Jeremy Pruitt [1] his first signature win as UT’s head coach. 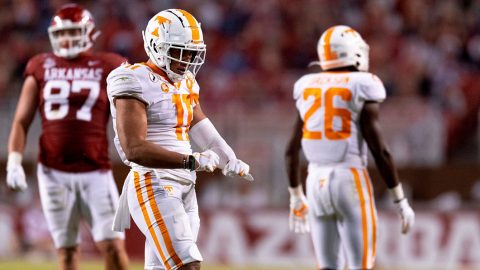 The contest can also be seen on ESPN’s SkyCast feed by clicking HERE [2].

November Road
Tennessee returns to action for the first time in 14 days after an unexpected open weekend. The Vols’ scheduled home game against Texas A&M on November 14th in Neyland Stadium was postponed due to a combination of positive COVID-19 Coronavirus tests and contact tracing within the Texas A&M football program. That game is tentatively rescheduled for December 12th in Knoxville. All three of UT’s currently scheduled November games are on the road, marking the first time since 1891 that the Vols will not play a home game during the month.

To’o To’o Tackling Machine
After a freshman All-America campaign in 2019, sophomore linebacker Henry To’o To’o [4] leads the Vols in tackles (40) and tackles for loss (7.0) as a sophomore. He’s tied for the SEC lead in tackles for loss with Auburn’s Colby Wooden. In the season-opening win at South Carolina, he recorded his first career interception and returned it 32 yards for a touchdown. To’o To’o has recorded multiple tackles in 18 of the 19 career games he’s played.

Gray Getting it Done
Talented sophomore running back Eric Gray [5] has gone over 100 yards rushing in three of his six games this season, including 123 yards on 31 carries and one touchdown in his last outing at Arkansas. He is averaging 101.3 yards per game on the ground in the last eight games dating back to last season.

Kennedy Named Finalist for “Academic Heisman”
For the seventh time in program history, Tennessee has produced a National Football Foundation National Scholar-Athlete as senior graduate center Brandon Kennedy [6] was selected as one of 12 finalists for the William V. Campbell Trophy. Kennedy and the 11 other finalists will each receive $18,000 postgraduate scholarships as members of the 2020 NFF National Scholar-Athlete Class.


Kennedy is the first Vol to be named an NFF National Scholar-Athlete since Michael Munoz in 2004. Munoz went on the capture the Campbell Trophy, seven years after Peyton Manning won the award. Kennedy was one of only three Power 5 student-athletes to earn the honor this season, joining Texas quarterback Sam Ehlinger and Washington defensive back Elijah Molden.

Tigers lead series, 28-22-3
Tennessee trails in the all-time series with Auburn after winning just one of the past seven meetings. However, that victory came the last time the two programs met, when the unranked Vols went into Jordan-Hare and sprung the upset, defeating the 21st ranked Tigers 30-24 to record their first win over a ranked Auburn team since 1980.

A win on Saturday would give Tennessee back-to-back wins against the Tigers for the first time since the 1998 and 1999 seasons.

Like Tennessee, Auburn is also coming off an unexpected open week after their game with Mississippi State was postponed. The Tigers have won two straight games after recording victories over Ole Miss (35-28) and LSU (48-11). They enter Saturday’s contest with a 4-2 overall record. The Tigers rank fourth in the SEC in scoring defense (22.8 ppg) and sixth in the conference in total offense (405.8 ppg).


Williams ranks fourth in the conference in receiving yards per game (85.2) while Schwartz’s 38 catches are tied for fourth in the league. Running back Tank Bigsby has been one of the top freshmen in the SEC this season, ranking third in the conference in all-purpose yards per game (148.8). He leads the Tigers in rushing with 89 carries for 503 yards and five touchdowns.

Junior linebacker Zakoby McClain leads Auburn with 62 tackles on the year and also has three tackles for loss and two sacks. Redshirt freshman linebacker Colby Wooden is tied for the SEC lead in tackles for loss with seven. Junior defensive back Roger McCreary leads the Tigers’ secondary with two interceptions and three pass breakups.