Over the course of his Austin Peay State University (APSU) men’s basketball career, you could point to a lot of different games as a Terry Taylor [1] Game—games where he tossed the team on his back, put up absurd numbers in victory, matched a fellow big step-for-step or hit the big shot when the Govs needed him most. 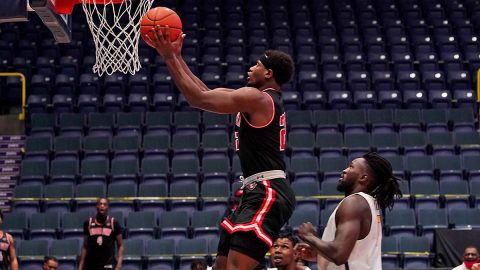 Twenty-nine points, 10 boards and the game-tying bucket in regulation against UNC Asheville his freshman year.

Forty-two and 18 in overtime at Morehead State his sophomore season.

You get the point. Terry Taylor [1] brings it every game, but there are those special moments where he Brings It. And his Thanksgiving Day performance against East Tennessee State (ETSU)—25 points, 16 boards and multiple go-ahead buckets down the stretch of a 67-66 Austin Peay State University win—falls squarely under the parameters of Bringing It.

The contest’s opening minutes were a dichotomy—the APSU Govs cleaned up every miss, getting second and third looks on just about every possession. However, ETSU couldn’t miss from the floor early—the Bucs hit five straight shots to open the game and eked out a 13-9 lead in the first six minutes.

Both outliers—the Govs’ rebounding and the Bucs’ shooting—regressed to the mean as the half went on. So too did the score swing, back and forth with neither squad seizing the upper hand for long. With just under two minutes to play in the half, a DJ Peavy [2] drive put the Govs up seven—the largest lead for either team in the first half—but ETSU closed the half on a 7-0 run, with Southeast Missouri transfer Ledarrius Brewer providing five of those points to send the teams into the locker rooms tied at 36.

The APSU Governors came out of the break and slowly built an eight-point lead by the 10-minute mark, ending the 16-8 run with a feed from Mike Peake [3] to Taylor for a bucket. But the Bucs posted a quick 10-2 run of their own to tie the game with just over seven minutes to play.

The game was never more than a possession out of reach for either team over the final seven minutes of play; David Sloan gave the Bucs a brief lead with a three one possession and a layup the next following two Carlos Paez [4] free-throws, but two Taylor free-throws and a layup of his own put the APSU Govs back ahead with 4:41 to play.

Scoring would be at a premium as both teams tightened up defensively down the stretch. After a Damari Monsanto three put ETSU back ahead with 3:36 to go, Austin Peay State University wasn’t able to find the tying bucket until a Reginald Gee [5] drive to the hoop with under two minutes to go. A minute of tense basketball passed before a Brewer dunk gave the Bucs the upper hand again.


Then it was Taylor Time.

Out of a 30-second timeout, Taylor powered through contact for an up-and-under bucket and sank the free-throw with 35 seconds left to give the Govs a tenuous lead. Credit to Brewer, who led the Bucs with 16 points—he answered with an elbow jumper on the next possession to put ETSU back in the lead with 17 ticks left.

On the game’s penultimate possession, Taylor drove the lane for a short jumper that missed right. The senior collected himself and jumped for his 10th offensive rebound of the game, collecting the ball and sticking it in with 5.1 seconds to play. A Sloan three attempt on the other end banged off the back iron and the Govs moved to 2-0 on the season.

Having Taylor and Peake will help a team inside, and so it went for Austin Peay State University, Thursday. The APSU Govs outscored the Bucs 42-20 on points in the paint, and carried a 16-9 advantage in second-chance points.

Gee was the only other APSU Gov to finish in double figures with 11 points, his fifth game in eight appearances as a Gov with a double-digit scoring tally.

The plus-22 edge on points in the paint was Austin Peay State University’s largest since outscoring Southeast Missouri 42-18 in the paint on January 16th, 2020.

This is Austin Peay State University’s first victory in a game where the Govs shot below 40 percent since January 11th, 2020 at Jacksonville State.

The win is APSU’s first in a nonconference game when scoring fewer than 70 points since December 2nd, 2017 at Alabama A&M.

In the first half of both games at the Gulf Coast Showcase, the Governors free-throw shooting has been a pedestrian 61.1 percent (11-for-18); the APSU Govs come alive in the second half at the stripe, hitting 75.0 percent (21-for-28) in the second half.

Milestone Watch: Taylor took over second all-time in career field goals made with 759; all that remains is the 870 recorded by Bubba Wells during his Austin Peay State University career. He also passed Otis Howard for third all-time in career rebounds with 975 and, with his first-half steal, became the fifth player in program history with 100 steals and 100 blocks in his career.

On Taylor
“He did everything he possibly could to will us to win. That’s what a senior does, that’s what a guy who is as talented as Terry has to do. We were a trainwreck offensively, and he and Reggie were the only thing offensively to give us anything good.”

On ETSU
“I knew we would see a better ETSU team than they showed yesterday. That team is too talented, they’ve got two guys who have seen high-major minutes, they’ve got guys who have played in the NCAA Tournament at other programs. They’re going to figure it out, and today was more characteristic of the talent they have.”

On crunch-time experience
“You can’t do things without experience. In this tournament, we’ve learned we’re a good enough team to build big leads but we haven’t been good enough to hold them and we have to continue to work on that.”


Up Next for APSU Govs

Austin Peay State University men’s basketball’s stay at the #BeachBubble Gulf Coast Showcase comes to an end Friday with a 1:00pm CT contest against Abilene Christian; the Wildcats had Thursday off after defeating East Tennessee State 70-47 in the tournament-opener, Wednesday.