Nashville, TN – The Tennessee Titans visit Indianapolis this week to face the Colts for the second time in a three-week span. The clash between the two clubs, each sporting a 7-3 record and coming off a dramatic overtime win, is likely to have a significant bearing on the AFC South race. Kickoff at Lucas Oil Stadium is scheduled for 12:00pm CT on Sunday, November 29th, 2020.

The Colts are scheduled to host up to 12,500 fans for the game to meet local, NFL and U.S. Center of Disease Control and Prevention (CDC) guidelines to help limit the spread of COVID-19 Coronavirus. 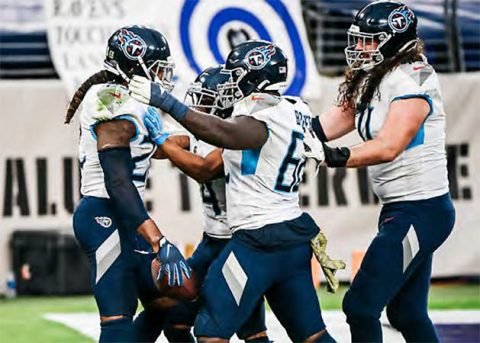 On Thursday night, November 12th, the Colts visited Nashville for the first of two annual matchups.

The Titans jumped out to an early lead, but it was the Colts who pulled away in the second half for a 34-17 victory that put them atop the division standings.

Fans can livestream the broadcast on their mobile devices from the Titans Mobile App (iOS and Android) and on TennesseeTitans.com mobile web. Restrictions apply. For more information and additional options visit TennesseeTitans.com or NFL.com/ways-to-watch.

Additionally, ESPN Radio will broadcast the game to a national audience. Play-by-play announcer Marc Kestecher and analyst Barrett Jones will have the call.

The Tennessee Titans traveled to Baltimore last week in a rematch of last year’s divisional playoff contest against the Ravens. The Titans rallied to erase an 11-point deficit to grab a fourth-quarter lead and eventually prevail in overtime by a final score of 30-24.

Running back Derrick Henry scored the game-winning touchdown on a 29-yard run in extra time, capping a 133-yard performance that put him back in the NFL rushing lead with 1,079 rushing yards in 2020. Additionally, Henry became the first player in NFL history to rush for two overtime touchdowns in a single season (October 18th vs. Houston).

Titans quarterback Ryan Tannehill completed 22 of 31 passes for 259 yards with touchdown passes to tight end Jonnu Smith (one yard) and wide receiver A.J. Brown (14 yards). Tannehill was credited with his eighth game-winning drive since arriving in Tennessee in 2019, tying Buffalo’s Josh Allen for the league lead in that span.

The win gave the Titans their best record through 10 games since they had a 10-0 start in 2008, but it also set up a showdown this week that will put the winner of the Titans-Colts matchup alone at the top of the division standings with five games remaining.

The AFC playoff field remains crowded. The Titans and Colts are two of nine teams with at least six wins, and seven teams are either 6-4 or 7-3. Ultimately the conference playoff field will include four division winners and three wild cards.

About the Indianapolis Colts

The Colts, who have the NFL’s second-ranked defense (298.1 yards allowed per game), will host the Titans hoping to extend their winning streak to three games following their comeback victory over the Green Bay Packers in Week 11. A fumble recovery in overtime set up Rodrigo Blankenship’s 39-yard field goal to win it, 34-31.

Quarterback Philip Rivers is in his first season in Indianapolis after joining the club as an unrestricted free agent from the Los Angeles Chargers during the offseason. The eight-time Pro Bowl selection and Athens, AL, native ranks fifth in NFL history in passing yards (61,954) and sixth in passing touchdowns (411).

The Colts are trying to get back to the playoffs under Frank Reich, who is in his third season as the organization’s head coach. After he spearheaded a 10-6 record and a first-round playoff win in 2018, the Colts finished 7-9 in 2019.