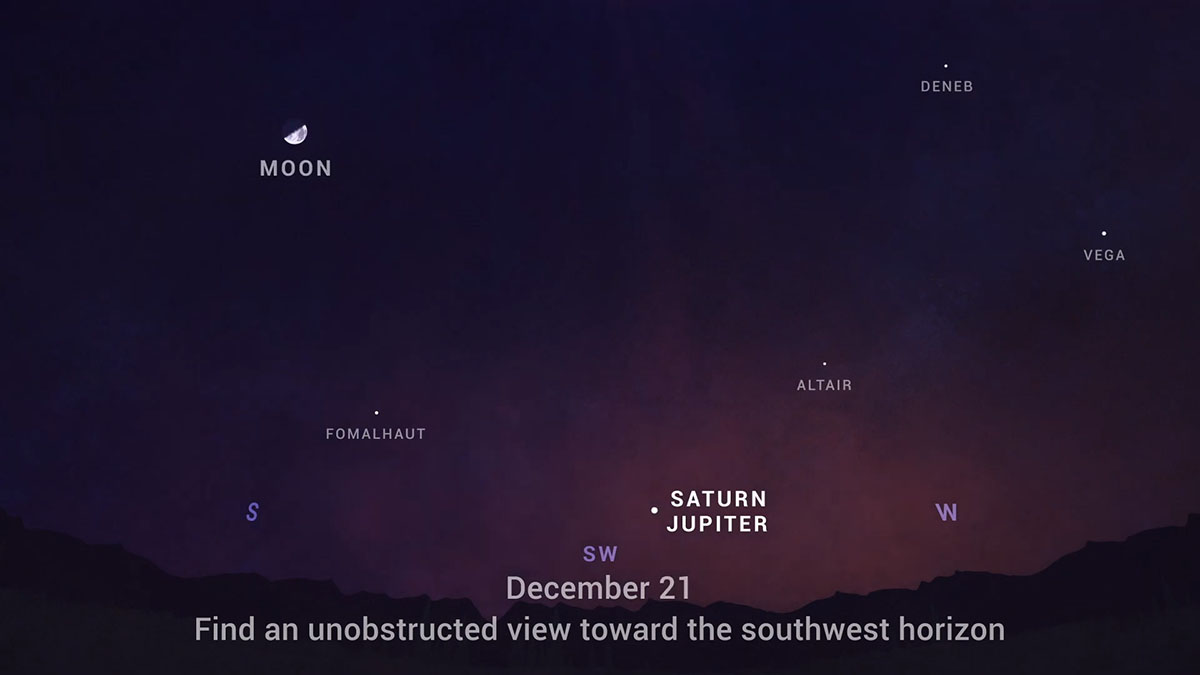 Washington, D.C. – Skywatchers are in for an end-of-year treat. What has become known popularly as the “Christmas Star” is an especially vibrant planetary conjunction easily visible in the evening sky over the next two weeks as the bright planets Jupiter and Saturn come together, culminating on the night of December 21st, 2020.

In 1610, Italian astronomer Galileo Galilei pointed his telescope to the night sky, discovering the four moons of Jupiter – Io, Europa, Ganymede, and Callisto. In that same year, Galileo also discovered a strange oval surrounding Saturn, which later observations determined to be its rings.

These discoveries changed how people understood the far reaches of our solar system.

Thirteen years later, in 1623, the solar system’s two giant planets, Jupiter and Saturn, traveled together across the sky. Jupiter caught up to and passed Saturn, in an astronomical event known as a “Great Conjunction.”

“You can imagine the solar system to be a racetrack, with each of the planets as a runner in their own lane and the Earth toward the center of the stadium,” said Henry Throop, astronomer in the Planetary Science Division at NASA Headquarters in Washington. “From our vantage point, we’ll be able to be to see Jupiter on the inside lane, approaching Saturn all month and finally overtaking it on December 21st.”

The planets regularly appear to pass each other in the solar system, with the positions of Jupiter and Saturn being aligned in the sky about once every 20 years.

What makes this year’s spectacle so rare, then? It’s been nearly 400 years since the planets passed this close to each other in the sky, and nearly 800 years since the alignment of Saturn and Jupiter occurred at night, as it will for 2020, allowing nearly everyone around the world to witness this “great conjunction.”

The closest alignment will appear just a tenth of a degree apart and last for a few days. On the 21st, they will appear so close that a pinkie finger at arm’s length will easily cover both planets in the sky. The planets will be easy to see with the unaided eye by looking toward the southwest just after sunset.

From our vantage point on Earth the huge gas giants will appear very close together, but they will remain hundreds of millions of miles apart in space. And while the conjunction is happening on the same day as the winter solstice, the timing is merely a coincidence, based on the orbits of the planets and the tilt of the Earth.

“Conjunctions like this could happen on any day of the year, depending on where the planets are in their orbits,” said Throop. “The date of the conjunction is determined by the positions of Jupiter, Saturn, and the Earth in their paths around the Sun, while the date of the solstice is determined by the tilt of Earth’s axis. The solstice is the longest night of the year, so this rare coincidence will give people a great chance to go outside and see the solar system.”

Want to learn when and where to look up? Join Throop as he talks about the “Great Conjunction” on #NASAScience Live Thursday, December 17th. Submit your questions by using #askNASA. The NASA Science Live episode will air live at 2:00pm CT Thursday on NASA Television and the agency’s website, along with the NASA Facebook, YouTube, and Periscope channels.


For those who would like to see this phenomenon for themselves, here’s what to do:

Each night, the two planets will appear closer low in the southwest in the hour after sunset as illustrated in the below graphic: 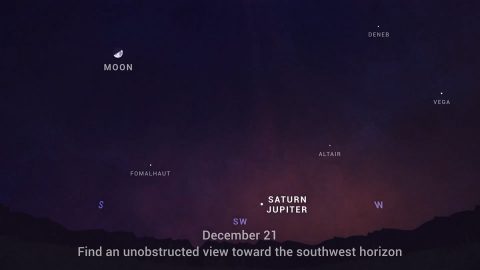 Learn these tips and trick on how to photograph planets:
https://solarsystem.nasa.gov/news/1615/how-to-photograph-the-conjunction-of-saturn-and-jupiter/

Visitors to Both Jupiter and Saturn:
https://nightsky.jpl.nasa.gov/news-display.cfm?News_ID=931

Want to learn more about planetary conjunctions? Take a look at some of these resources:
https://blogs.nasa.gov/Watch_the_Skies/2015/06/30/jupiter-and-venus-conjunction/
https://youtu.be/sofRYcfaqy0