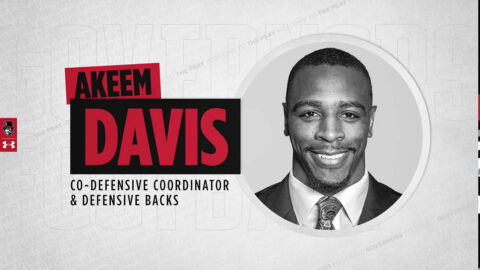 Davis was a member of the Golden Eagles coaching staff the past four seasons beginning as a defensive graduate assistant for the 2017 and 2018 seasons.

After earning his master’s degree in sports administration from Southern Miss, he was USM’s cornerbacks coach for the 2019 season. This fall, Davis moved to the Golden Eagles’ running backs coach.

“I was very fortunate to work with Akeem at Southern Miss,” said Walden. “I believe Akeem has a rare combination of knowledge for the game as well as an unbelievable energy and passion for young people. He has seen and played the game at its highest level and I know our players will thrive under his leadership and energy. We are blessed to have coach Davis and his family here in Clarksville.”

“My family and I are extremely blessed to be given an opportunity to join coach Walden, along with the incredible coaching staff he’s assembled, in molding young men at Austin Peay,” said Davis. “I look forward to winning championships on and off the football field. We are extremely excited to ‘Be A Gov!'”

While in Hattiesburg, Davis helped the defensive unit rank 20th nationally in defensive yards allowed in 2017. The next season, USM improved to No. 3 nationally, as opponents averaged nearly 60 fewer yards per game. Southern Miss participated in the 2017 Independence Bowl and 2019 Armed Forces Bowl while Davis was on the coaching staff.

A Memphis graduate, Davis was an undrafted free agent signee by the NFL’s Washington Football Team in 2014 and spent parts of three seasons on the active roster at Washington, New Orleans, Seattle, Indianapolis, and Jacksonville. He played 21 games in the NFL, finishing with 11 tackles and a fumble forced. The NFL Network documented Davis’ journey from undrafted free agent to making a 53-man NFL roster in its “Undrafted” series.

Before his professional career, Davis played three seasons at Memphis (2010-12) and was team captain twice. He ultimately appeared in 34 games (24 starts) for the Tigers with 162 tackles, three interceptions, five fumbles forced, and seven fumbles recovered. Davis graduated from Memphis with his bachelor’s degree in finance.


Off the field, Davis established the AD47 Football Leadership Academy. AD47 is a free, one-day football skills camp dedicated to implementing the “Five Pillars” core curriculum of Character, Leadership, Discipline, Follow-through, and Grit. The academy is sanctioned and insured by the NFL Foundation and run in partnership with USA Football through the FUNdamentals program.

The inaugural AD47 was held in Laurel, Mississippi, in June 2015 and featured 53 school children, ages 8-12 from across the greater Laurel region. In 2016, it expanded to 100 children and has been at full capacity each summer since.