Clarksville, TN – Austin Peay State University (APSU) women’s basketball had eight players available and they each played double-digit minutes and found their way onto the scoresheet en route to a 58-45 win over Tennessee State, Tuesday, in the Winfield Dunn Center. 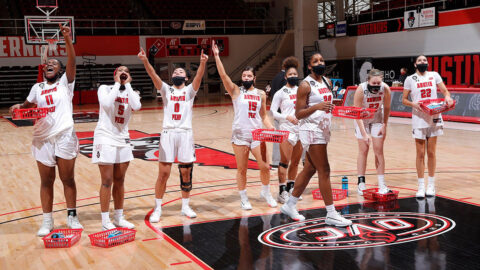 Tahanee Bennell [1] led the shorthanded Govs by posting her career’s first double-double, scoring 12 points, and pulling down a career-high 11 rebounds.

D’Shara Booker [2] narrowly missed out on her second double-double in three games, matching her career-high with 10 rebounds and scoring 9 points while going a perfect 4-4 from the floor.

Behind Bennell and Booker’s career days on the glass, Austin Peay State University (10-5, 8-3) dominated the boards and outrebounded the Lady Tigers, 50-30. The Governors also pulled down 17 offensive rebounds and accumulated a plus-ten advantage over Tennessee State (0-15, 0-13) on the offensive glass.

Booker got the scoring started for the Govs; knocking down a free throw on the first possession before slipping behind her defender in the post for an easy bucket to tie the score, 3-3, after Andreana Wrister knocked down a three-pointer for the first of her game-high 22 points to get the Lady Tigers on the board.

After another Tennessee State basket, the Governors started firing from deep, with Brianah Ferby [3], Shay-Lee Kirby [4], and Bennell hitting three-pointers on three-straight possessions to give the Govs a 12-7 lead at the media timeout. After a Kelen Kenol [5] free throw and a pair of Kirby free throws, Myah LeFlore [6] knocked down another triple to cap off a 9-0 APSU and push the lead to 11 points with 2:26 left in the first period.

A Brianah Ferby [3] three-pointer with 54 seconds left stretched the Govs lead to a dozen points, but a Wrister steal and fast-break layup trimmed the Austin Peay State University advantage to just 10 at the end of the quarter.

After Wrister connected on another three-pointer to start the second period, Booker scored back-to-back baskets and Bennell hit an acrobatic reverse layup to push the Governors lead back to 13 points.

With 5:15 left before the half and the Govs leading by just 9, Austin Peay State University knocked down four three-pointers to close out the first half.

Leading by nine with 5:15 left before halftime, Austin Peay would go on to knock down four three-pointers to close out the first half. Kirby drilled a pair of triples that sandwiched Kasey Kidwell’s [7] first three-pointer of the season and then Bennell connected from downtown for the second time to give the Govs a 39-24 lead at the break.

Bennell dished out a season-high seven rebounds, matching Brianah Ferby [3] for the best single-game total by a Governor this season.

Booker matcher her career-high with 10 rebounds, she was one point shy of posting her second career double-double.

Booker went a perfect 4-4 from the floor against Tennessee State, she has now made 14 consecutive field goals dating back to January 23rd when the Govs took on Jacksonville State.

Maggie Knowles [9] grabbed seven rebounds as well – one off her career and season-high.

Brianah Ferby [3] knocked at least three three-pointers for the third time this season and scored in double figures for the second-straight game.

Shay-Lee Kirby [4] knocked at least three three-pointers for the fourth time this season; she also scored in double figures for the first time since she posted 13 points at UT Martin, January 14th.

On his team
“I cannot say enough about those eight ladies and I can’t’ say enough about our team with what they have been through since we last played on January 25th. But they wanted to play and they did a really good job against a Tennessee State team that is vastly improved since the last time we played them. I give our ladies all the credit today for being ready to play and not making any excuses.”

The Austin Peay State University women’s basketball team will wrap up a quick three-game home stand when they host UT Martin for a 4:30pm, Thursday game, and Southeast Missouri for a 1:00pm, Saturday contest. After this week’s final two games at the Dunn Center, the Govs will hit the road for a 5:00pm, February 15th contest at Morehead State.