Savannah, GA – Darkness cut short the second round of the Austin Peay State University (APSU) men’s golf team’s stroke-play debut for the 2021 season at the Invitational at Savannah Harbor, with the Govs about four holes short of completing the course twice on Saturday. 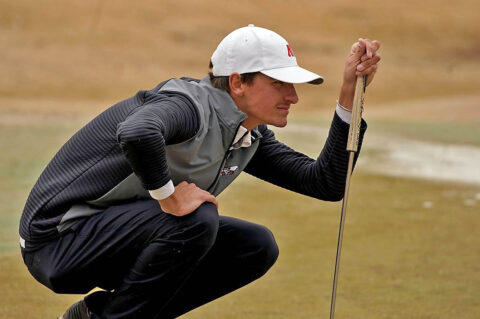 APSU will need a solid showing to close out the second round, which was the inferior of Saturday’s loops.

Sophomore Jordan Rodriguez [3], playing as the individual, roared out to an early lead at two-under after four holes on his way to a career-best 76.

The second round was ominous from the start, with four of five Governors carding bogey or worse on their collective second hole, the 412-yard par-4 at No. 6. From there, the bogeys became more elusive but the birdies near-impossible to come by, with Micah Knisley’s [4] back-to-back birdies on Nos. 11 and 12 the only back-to-back birds recorded by a Gov during the second round.

There are some bright spots heading into the final day. Korte is among the tournament leaders with seven birdies, and Busse remains a monster with the driver, averaging 4.57 shots per hole on par-5 attempts. The Govs will look to close out the second round on a high note tomorrow, secure a few more putts to drop from Knisley, Alex Vegh [5], and Garrett Whitfield [6], and look to maneuver up the leaderboard during the final round.

Play concludes from the Club at Savannah Harbor tomorrow afternoon. A complete recap will be available after the round at LetsGoPeay.com.