Knoxville, TN – No. 14/16 Tennessee women’s basketball (15-6, 9-4 SEC), which earned the No. 3 seed by virtue of its third-place regular-season finish, will open play on Friday night at the SEC Tournament in Greenville, SC. 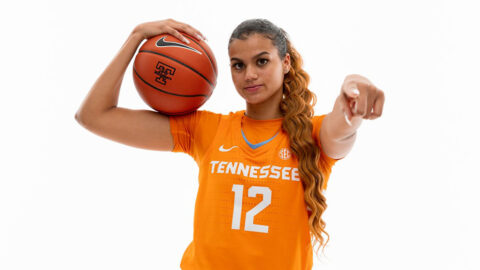 Tennessee Women’s Basketball will play the winner between Arkansas and Ole Miss on Friday at the SEC Tournament. (UT Athletics)

The UT Lady Vols’ No. 3 seed is their highest since taking a No. 2 position into the 2015 SEC Tourney in North Little Rock, AR, and advancing to the championship game.

While it may have been forgotten, UT also tied for third in the regular-season conference standings a year ago in Kellie Harper [1]‘s first season, but it drew the No. 6 seed for the tourney by virtue of the league’s tiebreaker system.

Tennessee was picked to finish sixth this season by the league’s coaches and media and was selected seventh by the coaches and sixth by the media last season, overachieving in Harper’s first two years.

Institutions can produce for SEC Network+ (SECN+) any conference and non-conference games that are not otherwise televised. Those are available on the ESPN app and SECSports.com.


Tennessee In The SEC Tournament

The Lady Vols are 36-5 all-time in their opening game of the SEC Tournament and are 26-10 in their second contest of the tourney.

Tennessee has had 15 SEC Tournament MVPs through the years, with a Lady Vol winning four of the last nine awards.

This is the second SEC Tournament for Kellie Harper [1] and her coaching staff while at Tennessee. UT was 1-1 in 2019-20.

Assistant Lacey Goldwire [8] worked on Mike Neighbors’ staff at Arkansas two seasons ago during the Razorbacks’ drive to a runner-up finish.

Jordan Horston [10] is averaging 15.0 ppg. in SEC Tourney play after scoring six and 24 vs. Missouri and Kentucky last season.

This marks the fifth time Greenville has played host to the SEC Tournament.

UT stands at 5-3 in games played in the city after beating Mizzou and falling to Kentucky a year ago.

Tennessee Head Coach Kellie Harper [1] is 19-10 in SEC games in her second year leading the team and has a 1-1 record in SEC Tourney play.

The Lady Vols (projected sixth in preseason polls) have beaten three teams ranked above them in the 2020-21 SEC Coaches and Media Polls, including No. 1/1 selection South Carolina, No. 2/3 pick Kentucky and No. 4/5 selection Arkansas.

UT tied for third a year ago and finished third outright this season, marking its best back-to-back outcomes in league play since taking second in 2013-14 and first in 2014-15.

Next Win Is NO. 1,400: The Lady Vols have the most all-time wins by a women’s basketball program in NCAA Division I history, standing at 1,399-349 entering the SEC Tournament.

Stacking Up 20s: Rennia Davis [9] enters the SEC Tourney with a five-game streak of scoring 20 points or more.

Horston’s Star Rising: Jordan Horston [10] has 27 assists vs. 11 turnovers in her last five games and is third in the SEC in all games at 4.3 apg. and second in league contests at 4.7 apg. this season.


“TK” Bolsters UT’s Defense: Tamari Key [13] anchors the back of UT’s defense, ranking second in blocks per game at 3.4 in the SEC and tying for second among peers in all games at 2.9.

Kasi Flipped A Switch: Since becoming a starter, Kasi Kushkituah is averaging 8.4 ppg. and 6.6 rpg.

SEC Honors: UT had four players honored by the league’s coaches. Senior Rennia Davis [9] and junior Rae Burrell [12] were named to the All-SEC First and Second Teams, respectively. Sophomore Tamari Key [13] was chosen for the All-Defensive Team and Marta Suárez was picked for the All-Freshman Team.

Cheryl Miller Finalist: Rennia Davis [9] was announced Wednesday as one of five finalists for the Cheryl Miller Award. She also is a finalist for the Senior CLASS Award and is on several other late season watch lists.

Credit Where Credit Is Due: UT was picked sixth and placed third in the SEC this season. Kellie Harper [1]‘s team is a No. 3 seed – UT’s best since 2015. UT did so despite graduating one starter from 2019-20 and losing two projected starters before the season began. It then lost a starting center to injury and has had a starting forward limited due to injury during the year. Still, the Lady Vols beat four ranked teams, including No. 2/3 South Carolina, and are a projected NCAA Tourney four seed.

Tennessee is 1-1 in overtime and 2-0 in the postseason vs. UA, meeting for the first time in SEC Tournament play in 2016. UT prevailed, 68-51, in the second round in Jacksonville, FL, on March 3rd of that year.

Rennia Davis [9] first established her career-high of 33 points and hit one of her 14 all-time shots with the clock winding down, draining a three at the close of the third period in Fayetteville on February 8th, 2018.

Then the starting point guard for UT, Kellie (Jolly) Harper tallied 11 points, five assists, and three rebounds during 30 minutes of duty in that contest.

Harper finished her career with a 4-1 record vs. the Razorbacks as a player.

This is the would be the third meeting between Harper and Mike Neighbors as head coaches, with Neighbors getting the “W” in 2019-20 and Harper earning one in 2020-21.

Second-year Lady Vol assistant coach Lacey Goldwire [8] was on Mike Neighbors’ staff at Arkansas for two seasons prior to joining Kellie Harper [1] at Tennessee in 2019-20.

Amber Ramirez poured in 35 points, a new career-high, while making eight of her 14 threes. Fellow redshirt seniors Chelsea Dungee and Destiny Slocum got in on the act as well, going for 20 points and 17 points, respectively.

Tennessee opened SEC play with a victory over No. 13/13 Arkansas at home on January 7th, winning 88-73 via an impressive 53.6 shooting percentage.

The Lady Vols have won 20 straight over the Rebels in Knoxville, with the last Ole Miss victory (69-65) coming on January 31st, 1987, in Stokely Athletics Center.

The Big Orange, which has allowed Ole Miss to surpass 70 points only once since 1997, would face a Rebels squad that comes in averaging 70.9 ppg.

On January 9th, 2020, Tennessee held Ole Miss to 28 points, which tied for the third fewest UT has allowed in a game and the fewest by an SEC foe.

The Rebels scored only 14 points in the second half of that game, which was the sixth-fewest ever tallied in the final 20 minutes by a UT opponent. Ole Miss’ two fourth-quarter points tied for second-fewest ever in a quarter by a Big Orange foe.

With a chance to escape day one of the SEC Women’s Basketball Tournament, the Rebels delivered yet again with an explosive second half and timely defensive stops to upset No. 17 Kentucky, 73-69, at Memorial Coliseum on February 28th.

Shakira Austin came up big with 22 points and 12 rebounds. Donnetta Johnson tossed in 14 points, while Madison Scott and Snudda Collins each finished with 12 points. Scott made it a double-double by grabbing 10 boards.

Donnetta Johnson was the high scorer for Ole Miss (7-6, 1-6 SEC) with 19 points, and Shakira Austin and Snudda Collins were close behind with 16 and 13, respectively.