Washington, D.C. – With a nickel increase on the week, the national gas price average has reached $2.77, which is a 31-cent jump in the last month. Every state average has climbed by double-digits since February resulting in 1 in 10 gas stations with pump prices that are $3.00/gallon or more.

Pump prices are increasing as refinery utilization is at an all-time low and crude oil prices (WTI) surged by more than $2.00/bbl to $66.00/bbl on Friday, the highest price in nearly two years.

The jump in crude followed the Organization of the Petroleum Exporting Countries’ and their allies’, collectively known as OPEC+, surprise decision to minimally increase production in April.

“With crude oil prices back on the rise, we could see the national average climb towards $2.90 this spring with some relief by early summer,” said Jeanette McGee, AAA spokesperson. “The last time we saw the national average flirt with $3.00 was nearly three years ago in May 2018. At that time, crude was averaging about $71.00 per barrel.”

The Energy Information Administration’s (EIA) report for the week ending February 26th shows refinery capacity at 56%, which is the lowest rate recorded by the agency. It is also 12 percentage points below last week and 18 percentage points lower than a year ago. EIA data also points to a decrease in gasoline stocks down to 243.4 million bbl, which is 3.5% below levels at the end of February 2020. 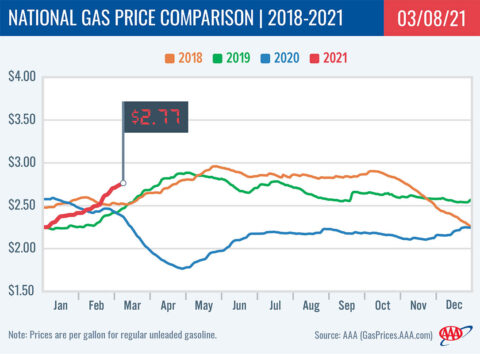 With refinery utilization at a record low, gasoline supplies tightening, demand modestly increasing and crude prices on the rise, cheap prices are in the rearview mirror for the immediate future.

Today’s national average is nearly 40 cents more expensive compared to a year ago, which was right before state lockdowns and working/school from home started.

At the close of Friday’s formal trading session, WTI increased by $2.26 to settle at $66.09. At the end of last week, OPEC+ announced the decision to add only about 170,000 barrels per day to world markets in April.

The industry had been expecting a production increase of about 1.5 million barrels per day in April, with more oil released in May, June, and beyond.

This decision sent crude oil surging to the highest price point since April 2019. For this week, prices may continue to increase if the market remains optimistic about crude demand as vaccines become more widespread.