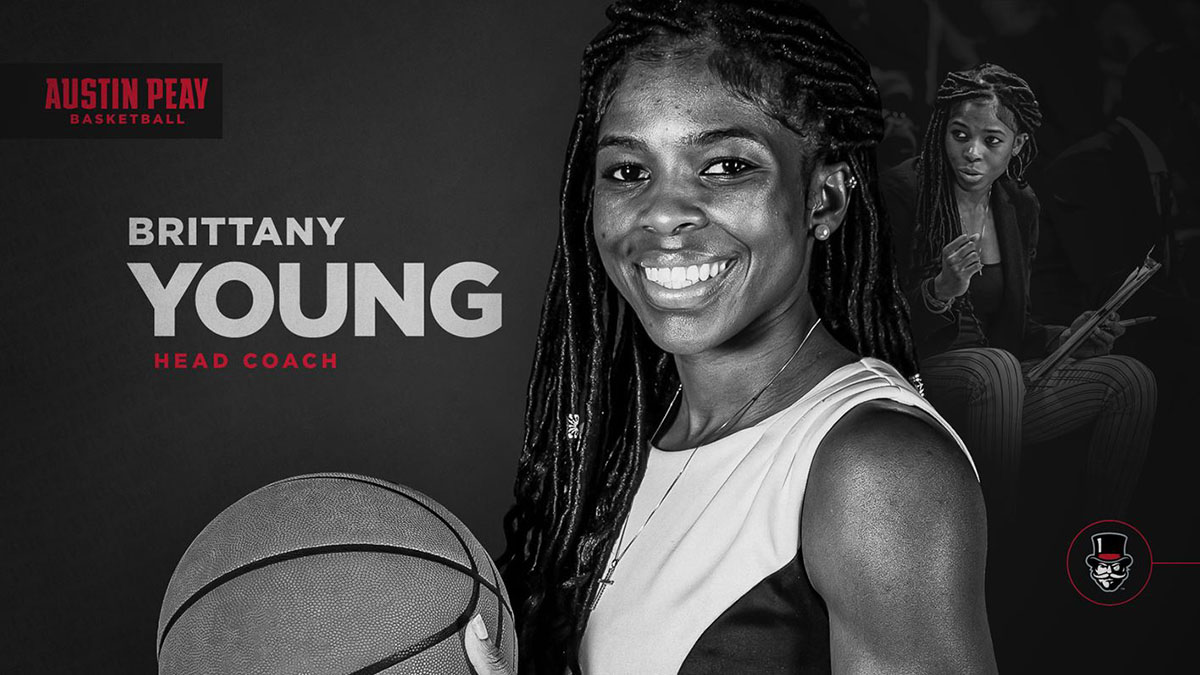 Clarksville, TN – Austin Peay State University (APSU) Director of Athletics Gerald Harrison has again turned to a young coach who has risen through the ranks and gained a reputation as a diligent recruiter to lead one of the department’s flagship programs. The APSU athletics department will introduce Brittany Young as the 11th head women’s basketball coach in program history at 4:00pm, Friday, in the Winfield Dunn Center. 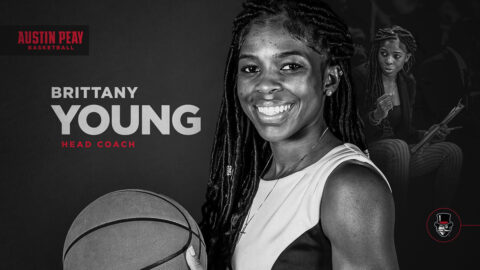 “During our search one name kept coming up and it was Brittany Young,” said Harrison. “Known as a tireless worker with a competitive spirit, Brittany quickly made a name for herself as one the best recruiters in all women’s college basketball.”

“She is a relationship builder; her student-athletes and coaching peers speak to her ability to connect anyone. She also is committed to developing the total student-athlete and, like me, believes in the ‘Total Gov’ concept. I’m extremely excited to welcome Brittany Young to the Austin Peay Athletics family,” Harrison stated.

Young takes over the Austin Peay State University women’s basketball program after a season as an assistant coach and recruiting coordinator at Mississippi State. In her season with the Bulldogs, she helped sign KN’isha Godfrey, a four-star rated recruit by espnW and the No. 8 point guard in the country to aid the program’s rebuilding process.

“I am truly honored and grateful to join the Austin Peay family and to become a part of the Clarksville community,” said Young. “There is great leadership at Austin Peay State University, and I would like to thank Director of Athletics Gerald Harrison and President Michael Licari for believing in me and my vision for this program. I look forward to connecting with our student-athletes as we strive to achieve excellence.  Let’s Go Peay!”

When Mississippi State head coach Nikki McCray-Penson moved to Starkville after three seasons at Old Dominion, Young joined her. The pair led a successful three-season turn at Old Dominion where they helped the program reach its first postseason appearance since 2015 amidst back-to-back 20-win campaigns.

“Brittany was a student-athlete at the Division II level and has coaching experience at the junior college, mid-major and Power 5 levels, giving her a wealth of experience to draw from—she’ll be prepared for anything the game can throw at her,” said Harrison.

“In addition, her mentors include some of the best in women’s athletics – Women’s Basketball Hall of Famers like Dawn Staley, Nikki McCray, and Pearl Moore,” said Harrison. Like them, I am confident that she will do an outstanding job moving our program to the next level,” Harrison continued.


In Young’s second year in Norfolk, Old Dominion boasted the seventh-youngest roster in the country after signing nine athletes during their first season. Despite the youth movement, the Monarchs posted a 13-win improvement from an 8-23 season to a 21-11 record in 2018-19.

That 12½-game improvement was sixth-best among Division I teams and ODU qualified for the Postseason WNIT. Ajah Wayne, a member of a nine-player recruiting class, was named to both the Conference USA All-Freshman Team and All-Defensive Team

The following season, ODU rolled to a 24-6 record and finished second in Conference USA. The Monarchs were a potential at-large team (ranked No. 33 in RPI) before the Conference USA and NCAA Tournaments were canceled due to the COVID-19 Coronavirus pandemic. Three ODU athletes earned All-Conference USA honors and guard Aziah Hudson was named the league’s Sixth Player of the Year.

Before joining McCray-Penson the past four seasons, Young spent two seasons as an assistant coach at Stetson. She helped the Hatters back-to-back 20-win campaigns: a 20-12 mark in 2015-16 and a 26-7 record in 2016-17 that included a 13-1 conference record to win the Atlantic Sun regular-season title. Stetson qualified for national postseason play each season, participating in the 2016 Women’s Basketball Invitational and the 2017 Postseason WNIT.

Young’s first full-time coaching position was at Daytona State College (2013-15). She was the program’s recruiting coordinator, director of player development, director of operations, academic coordinator, and strength and conditioning liaison. The Falcons improved from 11-17 in 2013-14 to 23-8 in 2014-15, winning a share of the Mid-Florida Conference title.

Young, a Moncks Corner, South Carolina native, was a CoSIDA Academic All-American® and all-conference performer at Francis Marion University. She was a member of the school’s all-decade team and earned team “Most Valuable Player” honors twice.


In addition to her success on the court, Young was President of the Student Athletic Advisory Council and was just one of 26 recipients of the NCAA Ethnic Minority and Women’s Enhancement Postgraduate Scholarship for Careers in Athletics in 2011. She graduated from Francis Marion in 2008 with a degree in Political Science.

Following her playing career, Young was a graduate assistant at South Carolina under Dawn Staley. During her two seasons at South Carolina (2011-13), the nationally-ranked Gamecocks twice earned a berth to the NCAA Tournament. She obtained her master’s degree in Sport and Entertainment Management from South Carolina in 2013.