Indianapolis, IN – The Tennessee basketball opens its account at the 2021 NCAA Tournament, with a first-round matchup in the Midwest Region with 12th-seeded Oregon State. Friday afternoons tipoff from Bankers Life Fieldhouse is scheduled for 3:30pm CT on TNT. 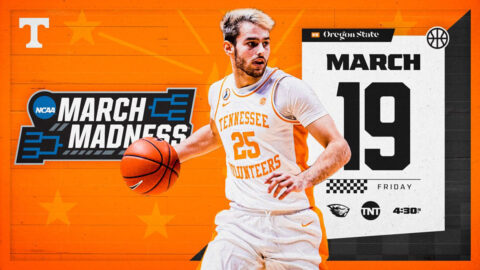 Tennessee Men’s Basketball will take on Oregon State in first round action of the NCAA Tournament, Friday. (UT Athletics)

Last time out, Tennessee fell in a hard-fought SEC semifinal matchup with Alabama, 73-68. The Vols were led by 38 combined points from the freshman duo of Keon Johnson [2] and Jaden Springer [3].

A win on Friday would advance Tennessee to its third consecutive NCAA Tournament second round, doing so in both 2018 and 2019.

Oregon State is located in Corvallis, Oregon, and is a member of the Pac-12.

The Vols’ and Beavers’ only common opponent this season is Colorado. Tennessee defeated Colorado, 56-47, in its season opener on December 8th. Oregon State lost twice to Colorado during the regular season but then defeated the Buffaloes in the Pac-12 championship game, 70-68.

Tennessee is 1-3 against Oregon State all-time, but have not faced the Beavers since 1990.

The Vols are making their third straight appearance in the NCAA Tournament. They most recently advanced to the Sweet Sixteen in 2019.

Senior forward John Fulkerson [5], a starter all season long, suffered a concussion and facial fracture in the SEC Tournament quarterfinals last Friday. He underwent surgery on Selection Sunday, and his status is being evaluated daily.


The SEC All-Freshman Team duo of Johnson and Jaden Springer [3] have combined to score 42.2 percent of Tennessee’s points over the last five games (149 of 353).

Back-to-back SEC All-Defensive Teamer Yves Pons [7] has at least one block in each of UT’s last nine games. Since the start of last season, he has 120 blocks in 57 games.

Should the Vols win Friday, they would face No. 4 seed Oklahoma State or No. 13 seed Liberty Sunday.

Tennessee is 1-3 all-time against Oklahoma State, with the most recent matchup coming in 2012 at the Puerto Rico Tip-Off, a 62-45 Cowboys win.

Tennessee and Oklahoma State have met once previously in the NCAA Tournament. In 2009, the No. 8 seed Cowboys defeated the No. 9 seed Volunteers, 77-75.

Rick Barnes [8] has coached against Oklahoma State 40 times in his career, compiling a 23-17 record.

Tennessee and Liberty have never previously met on the hardwood.

Barnes has faced Liberty twice as a head coach—in 1988 when Barnes was at George Mason and in 1990 when he was at Providence. Barnes’ teams won both matchups.

Barnes’ teams are 9-6 in second-round games.

After a season largely defined by ups and downs, Oregon State put together a near-perfect three-game stretch in Las Vegas at the Pac-12 Tournament, downing UCLA, Oregon, and Colorado to claim its first-ever Pac 12 basketball conference title in program history.

The Beavers are led by seventh-year head coach Wayne Tinkle, who has guided OSU to its first NCAA Tournament appearance in four years. Friday’s matchup marks the first time the Montana grad has squared off with the Vols as a head coach.

On the court, the Beavers are led by senior guard Ethan Thompson. A 2021 All- Pac-12 first-team honoree, Thompson owns the team lead in both scoring (15.3 ppg) and assists (3.9 apg). The Los Angeles, California, native has started all 123 games in his career, giving him the most starts in program history. He joins Naismith Basketball Hall of Famer Gary Payton as one of two players in Oregon State history to finish their career with at least 1,400 points and 400 assists.

In the frontcourt, Oregon State has relied on the contributions of Pac-12 All-Defensive Team honorable mention Warith Alatishe. The 6-foot-7 forward has been a beast on the boards, leading the team and ranking second in the Pac-12 in rebounding with 8.38 boards per game. He’s brought down double-digit rebounds on 11 occasions this season and ranks second in the league with six double-doubles. Alatishe also led the Pac-12 and ranks 23rd in the nation in offensive rebounding with 3.35 offensive boards per game.

Oregon State University is a land-grant university that is one of only four in America to also participate in the sea-, space- and sun-grant research consortia.


Tennessee In The NCAA Tournament

This is the program’s third NCAA berth under sixth-year head coach Rick Barnes [8].

Prior to the tournament, the Vols played 12 games against eight different teams comprising the field of 68, going 7-5 in those contests.

Of those seven wins, five were by a margin of 10 or more points.

Tennessee’s first collegiate basketball appearance in the state of Indiana came on December 20th, 1958, when the fifth-ranked Vols suffered an 81-66 loss to Butler at Butler Fieldhouse (now Hinkle Fieldhouse).

Interestingly, UT’s most recent appearance in the state also was a loss to Butler at Hinkle in 2015.

In the 1982 NCAA Tournament, Tennessee defeated Southwestern Louisiana (the Ragin’ Cajuns) before losing to Virginia at Market Square Arena in Indianapolis. Then in the 1983 NCAA Tournament, Tennessee beat Marquette before falling to Louisville at Roberts Municipal Stadium in Evansville. Most recently, in the 2014 Sweet Sixteen, UT dropped a 73-71 contest to Michigan at Indy’s Lucas Oil Stadium. The attendance of 41,072 at Lucas Oil stands as the largest crowd ever for a Tennessee basketball game.

Tennessee As A No. 5 Seed

Tennessee is competing as a No. 5 seed for just the second time in program history.

Tennessee went 2-1 as a No. 5 seed in 2007. The Vols defeated Long Beach State and Virginia in Columbus, Ohio, before falling in the Sweet Sixteen to No. 1-seeded Ohio State in San Antonio.


UT Vols In The Midwest Region

The Vols reached the Sweet Sixteen in two of those NCAA Tournaments while competing as the No. 6 seed in 2010 and the No. 11 seed in 2014.

That 2014 tournament run ended two points shy of an Elite Eight berth when the Vols fell to Michigan at Lucas Oil Stadium.

Tennessee head coach Rick Barnes [8] has guided four different programs to a total of 25 berths in The Big Dance. He led Providence and Clemson to three berths each before guiding Texas to 16 tournament appearances in 17 years. This is his third appearance with the UT Vols.

Barnes in 2018 became the 13th head coach ever to lead four different programs to the Division I NCAA Tournament.

Barnes has led his teams to seven Sweet Sixteens, three Elite Eights, and one Final Four in 2003.

From 1995 through 2016, every player Barnes coached for four years made at least three trips to the NCAA Tournament.

Second-year Tennessee assistant coach Kim English [14] was an assistant at Colorado from 2017-19. He was assigned the Oregon State scout and helped scheme the Buffs to a win in the 2019 Pac-12 Tournament.

Next Up For Tennessee Vols Basketball

The Tennessee Men’s basketball team will advance to the NCAA second round and take on the winner of Oklahoma State and Liberty on Sunday.