Austin, TX – The No. 3 seed Tennessee Lady Vols basketball team shot a scorching 52 percent from the floor to fend off in-state opponent and No. 14 seed Middle Tennessee in the NCAA First Round on Sunday, winning 87-62 at the Frank Erwin Center.

Senior Rennia Davis [1] led No. 13/15-ranked Tennessee (17-7) in scoring, posting a double-double with 24 points and 14 rebounds. Junior Rae Burrell [2] was close behind with 22 points, and sophomore Tamari Key [3] and senior Kasiyahna Kushkituah [4] were also in double figures with 13 and 10, respectively. Redshirt junior Jordan Walker [5] narrowly missed a double-double, finishing with nine points and a career-high 14 rebounds. 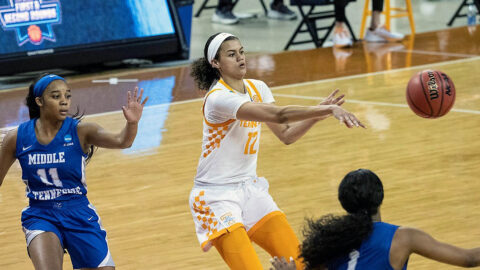 Middle Tennessee (17-8) was led by sisters Anastasia and Aislynn Hayes, who combined for two-thirds of the Lady Raiders’ 62 points. Anastasia Hayes [6] turned in 26, while Aislynn Hayes managed 15.

Tennessee jumped out to a lead early, going up 6-0 off buckets by Davis and Walker, before Anastasia Hayes [6] scored her first points of the game to put Middle Tennessee on the board just over three minutes in. The Blue Raiders pulled within three off an Anastasia Hayes [6] trey on their next possession, but Burrell and Davis combined for four quick points to give the Lady Vols a 12-5 lead at the media break.

Davis knocked down a jumper following the timeout to stretch the lead to nine before the Hayes sisters set off a 9-2 Middle Tennessee run to pull the Blue Raiders within two with just over two minutes left in the first. Davis hit a three to put UT up by five on the next possession, and Tennessee maintained that lead into the final seconds when a layup by Aislynn Hayes makes the score 21-18 Lady Vols at the end of the first.

MT tied it up at 23-all less than a minute into the second period and took the lead 50 seconds later off a trey by Courtney Whitson. Jordan Horston [7] hit a pair of free throws and Walker hit a jumper in the paint to reclaim the lead for UT at 27-26 at the 6:54 mark, but the teams would trade the lead five more times before the end of the half. Burrell hit six-straight points for the Lady Vols to end the quarter, setting the halftime score at 39-all.

Davis scored the first points of the second half with a jumper, and Key followed it up with four points to give UT a six-point lead three minutes in. Anastasia Hayes [6] hit two free throws to stop the UT run, but Burrell and Kushkituah scored on back-to-back plays to build UT’s lead up to eight.

Deja Cage answered with a 3-pointer to give MT a bit of momentum, but Kushkituah hit a layup on the next trip down the court, setting off a 9-0 spree that propelled the Lady Vols to a 58-44 lead with 2:24 to play in the third. The teams traded buckets through the closing minutes, with UT taking a 13-point lead into the final stanza.


Kesniia Kozlova scored a quick bucket to pull the Blue Raiders within 11 at the start of the fourth, and the teams swapped treys before UT launched into a 14-1 run to go up 79-55 with 4:50 left in the game.

Anastasia Hayes [6] hit a pair of layups in the closing minutes, but Tennessee kept its foot on the gas, stretching its lead to 28 off free throws by Davis and Burrell before Aislynn Hayes nailed a trey for the final bucket of the game to close out the scoring and send the Lady Vols on to the NCAA Second Round with an 87-62 victory.

Harper Gets Her First: Kellie Harper [9] picked up her first NCAA win as head coach of the UT Lady Vols and became only the second women’s coach to lead four different programs to the NCAA Division I Tournament. She is the first to do so as her alma mater.

Davis Making Moves: With 24 points and 14 rebounds, Rennia Davis [1] logged her 10th double-double of the season and the 39th of her career. Her new total of 943 career rebounds surpasses Shyra Ely (940) to land her at 10th all-time among Lady Vols. She also moved up the leader board in scoring, passing Sheila Frost (1,790) to rank ninth all-time with 1,803 career points.

Postseason Looks Good On Her: Davis has now recorded double-doubles in three of her four appearances in NCAA Tournament games. She is averaging 17.5 ppg. and 11.5 rpg. in games played in the NCAA Tournament.

Dominating The Paint: Tennessee outrebounded Middle Tennessee, 56-21, turning those into 21 second-chance points. On the season, UT is outrebounding opponents by an average of 45.8 rpg. to 32.3 rpg. The 56-rebound total was UT’s second-highest of the season and marked the seventh occasion in 2020-21 the Lady Vols had eclipsed 50 boards in a game. The 35-board margin was a season-high.

The Tennessee Lady Vols basketball team will advance to the Round of 32 to face the winner of No. 6 seed Michigan vs. No. 11 seed Florida Gulf Coast on Tuesday. Time, location, and television network are to be determined.