Clarksville, TN – The Austin Peay State University (APSU) soccer team is set to make a short trip down I-24 for a Tuesday match at 6:30pm against Belmont at E.S. Rose Park in Nashville. 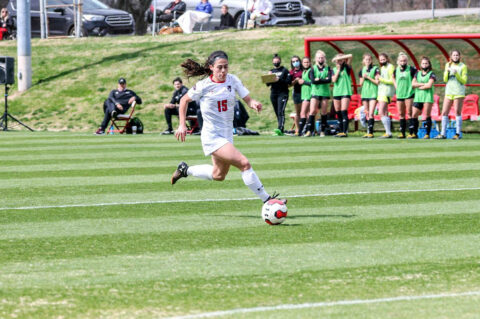 Already past the halfway point of the delayed 202 soccer season, Austin Peay State University picked up its second win of the season when it knocked off Eastern Kentucky in overtime last time out.

Rachel Bradberry [1] leads the Governors with five points this season, she scored the game-winning goal in the 100th minute against Eastern Kentucky.

With six points this season, Austin Peay State University is tied with UT Martin and Jacksonville State for sixth in the Ohio Valley Conference standings. Belmont has nine points this season and the Bruins are tied with Tennessee Tech for fourth place and the final spot in the 2020 OVC Soccer Tournament.

After winning the 2019 Ohio Valley Conference Tournament title, head coach Heather Henson enters her 10th season at the helm of Belmont soccer. The Bruins were the No. 6 seed in the 2019 OVC Tournament, but were able to go on four-match run to claim the championship.

The Bruins return a trio of 2019 All-OVC performers from last season, with Julie Garst and Rachel Vernon earning Second-Team honors and Avery Nowak being named to the All-Newcomer team.

Sarah Doyle has started in net for Belmont in all six games this season. Doyle posted a pair of shutouts against Tennessee Tech and Eastern Illinois last week en route to being named the OVC’s Co-Goalkeeper of the Week. The sophomore goalkeeper also ranks second in the OVC in total saves (31) this season.


After falling to the Bruins in the final game of the 2019 regular season, Austin Peay and Belmont met again a week later in the first round of the 2019 OVC Tournament. In the postseason meeting, both teams fired ten shots on goal in regulation, but neither was able to find the back of the net, with Mary Parker Powell [3] making ten saves for the Governors.

Belmont took the only shot of overtime and Julie Garst snuck a shot just under the hard-charging Powell for the game-winning tally in the 91st minute.

Prior to this season, Austin Peay State University returned a pair of goalkeepers who had yet to start a collegiate game; now Peyton Powell [4] (22 saves) and Chloé Dion [5] (12 saves) are the only pair of teammates to have double-digit saves in the OVC this season.

With 6 saves last time out against Eastern Kentucky, Powell has already made a career-best 22 saves this season.

Claire Larose [6] scored the 14th goal of her Austin Peay State University career against Eastern Kentucky, March 19th, and moved into a tie for seventh all-time in program history; she also ranks eighth all-time in points (35) and ninth in assists (7).

With a goal and an assist against Eastern Kentucky, Rachel Bradberry [1] now leads the Govs with 5 points this season. Bradberry’s 100th-minute goal against the Colonels was the seventh goal of her Austin Peay State University career and it was her first game-winning goal.

In APSU’s first three matches of the season, three of the four freshmen on the roster scored the first goal of their collegiate career. Isabel Petre [7] and Hannah Wilson [8] scored in the 56th and 74th minutes, respectively, against Jacksonville State, and Tori Case [9] scored in the 64th minute at SIU Edwardsville.

Ashley Whittaker’s [10] double-overtime goal against Jacksonville State was the fourth goal of her Austin Peay State University career and it was her first game-winning goal.

Austin Peay State University will strictly maintain social distancing measures at Morgan Brothers Soccer Field this season for the safety of fans, players, coaches, and staff. Individuals violating any of the above policies will be required to leave the facility.


Next Up For Austin Peay State University Soccer

The Austin Peay State University soccer team will return home to Morgan Brothers Soccer Field for its final two home matches of the season. The APSU Govs will host a Friday match at 2:00pm against Eastern Illinois and a March 30th match at 2:00pm against UT Martin before hitting the road for their regular-season finale at Morehead State, April 2nd.